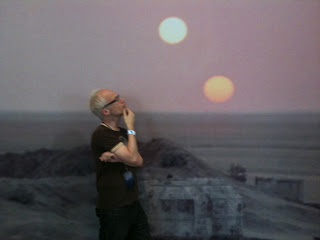 Who will win best picture this year, oh twin suns of Tatooine?

As I brag every year, I once won Movie Village's big Oscar contest grand prize by correctly choosing every, single Oscar category correctly - and a free movie rental every day for a year was mine.

The world was my oyster. Kids saluted me on the street. Women fainted in my presence. Trumpets played whenever I entered a room. "But then I began my long, long descent into obscurity," said the guy who last year chose Avatar to win best picture over the Hurt Locker. D'oh!

This year, I'm again using the Vanity Fair Hollywood app to make my Oscar predictions: for my money, a better app than the official Oscar app, which is clunky, clunky, clunky. The VF app features Oscar-related news, trailers, chat, the ability to share your picks on Facebook and Twitter and, on the big night, to track the leaderboard to see how you stack up.

Here are this year's terrible picks. I'm including the degree to which other users of Vanity Fair's app agree with them. This is a competition, not an exhibition. Please wager.

Best Picture
The Social Network (22 per cent agree)
The King's Speech has momentum, though.

Supporting Actor
Christian Bale - The Fighter (65 per cent agree)
But I secretly think that Geoffrey Rush might get it.

Cinematography
Inception (49 per cent agree)
But I secretly think it could go to True Grit.

Makeup
Adrien Morot - Barney's Version (12 per cent agree)
I'm betting that the Academy goes with a good movie. If not, it'll be Rick Baker's night.

Documentary
Exit Through the Gift Shop (57 per cent agree)

Animated Film
Toy Story 3 (81 per cent agree)
Because everyone knows that it's really best picture.

Score
Trent Reznor and Atticus Ross - The Social Network (41 per cent agree)
Music that on paper seems like it would be distracting, but that really works toward making the finished product better than it would be without it.

Visual Effects
Inception (83 per cent agree)
When in doubt in the small categories, vote "Inception" and you'll be right at least a couple of times, methinks.

Thank you for reading. Truly, it's an honor just to have you click through as a unique visitor.
Posted by Kenton Larsen at 9:26 PM