The first half of the big Super Bowl was a real barnburner, what with George W. Bush in the audience and...no, actually it was really boring.

We're just moments away from the Black Eyed Peas taking the stage, something that hasn't happened since...2005, when they did the same, damn thing at the Grey Cup.

It's nice to see Jimmy Johnson with his shirt on.

Oh, great: some local spots from Seattle. They're cracking down on parking ticket scofflaws, apparently.

Black Eyed Peas take to the stage on ropes. Phony fans run onto the field.

Band appears to be actually singing, though it's shitty as hell.

Tonight's Gonna Be a Good Night - if you've got the Cher "Believe" mic, apparently.

Background dancers look like extras from Woody Allen's "Everything You Always Wanted to Know About Sex." 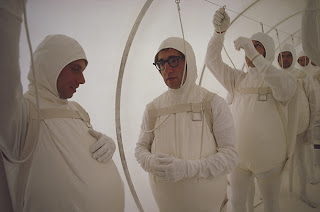 The choreographed phony fans go crazy when Usher appears. No, even they don't care.

There's something wrong with the mics - the band is singing into them.

This "rap music" is never going to catch on.

Band segues into "I've Had the Time of My Life" from Dirty Dancing. Patrick Swayze spins in his grave.

Who are the other two guys in the Black Eyed Peas? They're not necessary.

An ad for The Daily - the first iPad-only newspaper. I can definitively say that it doesn't hold a candle to the NY Times' app.

Joe Buck and Troy Aikman - the sexual tension in the room must be unbelievable.

Clever ad for Cars.com - great moments of learning from others' mistakes.

Another talking baby ad for E*Trade - not funny anymore.

Best Buy - Bieber and Ozzy together again. Not as good or amusing as one might expect.

Pittsburgh gets another touchdown. I get another beer.

New Pirates of the Caribbean trailer. Doesn't look much different from the other films.

MINI ad about cramming stuff in the back of your car. Ho-hum.

Timothy Hutton in a pretty funny Groupon ad. Uhhh...if it's supposed to be funny:

Adrien Brody is a crooner in a Stella ad. OK. Another decent CarMax ad - but nothing compares to the over-the-top ad announcing Simon Cowell's return to the X-Factor. Read all about it here.

There are now officially more commercials than game. Fine by me!

I've been eagerly awaiting the Angry Birds ad. Where is it?!

Microphone on referee is accidentally on. Announcer: "Luckily, he turned it off."

And Americans complain about curling being boring.

Listening to these announcers talk about the game is like listening to my mom talking about her friends - I've never heard of any of these people, but I'm supposed to be interested.

An ad for the NFL featuring all of the sitcoms of today and yesteryear - reminds me of Weezer's "Buddy Holly" video.

Creepy Jack in the Box mascot tries to sell us on a disgusting combo bucket.

Thank God - we're in the fourth quarter of the game.

I've got cheese on my head and egg on my face. Because I'm a Packers' fan who bet on the opposing team. Not really, but I'll bet that joke would kill at the bar.

"He was able to secure the catch." Translation: "He caught the ball."

Dogs serve Bud Light. Someone finally posted this one:

Cute Hyundai ad about how crappy life would be if we settled for the first thing we invented.

Started paying attention again when announcer mentions someone "trying to get his hands on my balls." Oh, my.

And VW brings back the Beetle!

Another po-mo ad - copywriters talk through their new spot for Dodge and it unfolds before our very ads.

iPhone Verizon ad - its USP: you can make phone calls on it now.

Glee does a Chevy ad - which is continued later on the show. Guess I'll never find out how it ends.

Horrible Skechers commercial with a Kardashian.

Oh yeah: someone won the game.

Update: Angry Birds code: go to screen 13, game 12. Shoot the white bird backward, drop egg on the hill. Get the golden football. Play the special level, beat it, and...watch the commercial all over again!
Posted by Kenton Larsen at 7:05 PM