Ramirez and marketing march to Hell together 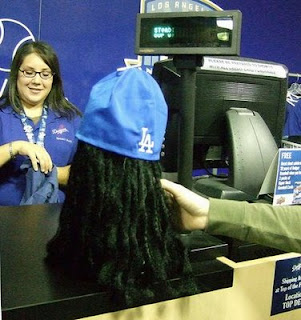 I'd like to return this quality item, please.
For sale: 2,000 Manny Ramirez wigs.

As the LA Dodgers have found out - painfully - basing an entire marketing strategy on a famous person is a dangerous thing.

When Ramirez got suspended from the Dodgers last week for taking steroids, he royally screwed over the team, its fans, and himself - but mostly, he screwed over the marketing and PR departments.

This would normally be bad news, but for the most passive marketing department in history, which - according to the NY Times - plans to do "nothing." Swell.

Here's the checklist of the Dodgers' troubles (as reported in the Times):
What's more frightening is that, as the Times reports, the Dodgers think the mess will go away, "mostly by doing nothing at all." Sigh.

As we learn in PR class every year, the Ostrich Strategy doesn't work: "A PR crisis won't go away if you ignore it."

Use the celebrity-based campaign with caution

In his book Hey, Whipple, Squeeze This, " Luke Sullivan points out that "a star isn't a concept. Only an executional technique." But even better than that is his warning:

"It doesn't happen very often, but celebrities have a way of turning up in hotel rooms with persons of questionable character, doubtful employment, and large Ziploc bags of "Peruvian Marching Powder" tucked into their orange vinyl boots."

"Are you willing to bet a client's financial future that your superstar won't end up manufacturing license plates?"

Posted by Kenton Larsen at 9:29 AM