A better reward for the homeless hero: a job, apartment, and support system 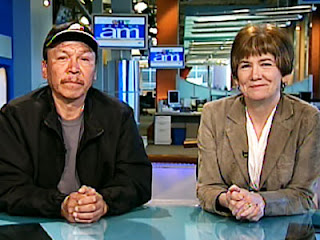 It is a great story, and it's equally great that it appears to have given Hall his moment in the sun, if not a new beginning. In some ways, it reminds me of the Susan Boyle story, in which someone who "looks a certain way" or "lives a certain lifestyle" surprises everyone by doing something pretty great.

Just look at the feedback on the above link at CTV.ca. Samples:

"This really lets you see that there is good in everybody. Hall is not a bad man because he is homeless. We all can learn a lesson from him." - Carlene

"I just hope this demystifies people's ignorant preconceptions of homeless people, which seem to run rampant. Maybe it's not such a good idea to squeeze them out of our urban cores. Maybe we should appreciate that they are human beings who can give to society like everyone else. Godspeed, Mr. Hall." - Karis

The other side of the story

I hope that this isn't a case of people loving the "feel-good" homeless story in the media, but ignoring the larger, and more depressing, homeless story going on all around them; sadly, people would rather watch Jamie Foxx portray a homeless man in a movie (see below) than notice a real homeless man right outside their window.

As well, the simple idea that this homeless man's life is now "better" is probably too good - and simplistic - to be true. Hall is a self-professed alcoholic with a troubled family background, and that's not something that's easy to overcome.

While this could be the catalyst to a new life for Hall - and I hope it is - the real answer is that overcoming alcohol addiction and a troubled past is "complicated," even for someone with a home and an income.

I'm sure I wasn't the only person who blanched at Mayor Sam Katz's gift to Hall: a medal and season tickets to the Goldeyes. Says "Richard" on the above link:

Well, OK, the guy likes baseball, but wouldn't the gift of a job, apartment, and counselling services really be something that could turn Hall's life around?

I'm reminded of David Cross' intro to his stand-up act:

"Did you hear that George W. Bush says we're going to the moon? Woo-hoo! Hey, everyone: we're going to put a man on the moon! Uh, how about putting a homeless man in an apartment?"

How Hollywood portrays the homeless:

Posted by Kenton Larsen at 1:10 PM