Larsen, Beck, and Costello to reunite at Winnipeg Folk Fest 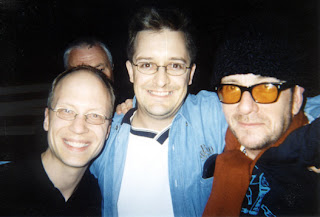 One of these people is not happy to be here.
Elvis has left the tent.

Elvis Costello will be playing this year's Winnipeg Folk Fest - and no one is happier than me.

Costello hasn't actually played in Winnipeg since 1978, when he performed at the Playhouse Theatre with the Attractions. Afterward, he showed up at a local bar and played a set with - someone help me, please, I can't remember who it was! I remember reading the article about it in the Winnipeg Free Press at the time, but was too young to go, so if anyone happens to be at the Millennium Library today, you know what to do.

On a related note, Rufus Wainwright was on Elvis' show, Spectacle, last night. Rufus sung some characteristically great songs (the transformation between "speaking" Wainwright and "singing" Wainwright is always surprising) and dropped "the Winnipeg Folk Fest" as one of his childhood influences. Nice!

I've seen Elvis Costello play a couple of times before: once at Jones Beach in New York City with Winnipeg's own Crash Test Dummies (no kidding!), and once in Minneapolis with Billy Bob Thornton (no kidding!), back when Billy Bob was still humble and boinking Brad Pitt's future creepy wife.

"We're just the band that plays when Elvis is putting on his drawers," said a modest Billy Bob from the stage, a long way from his wacko interview with CBC's Jian Ghomeshi.

My pal, Jason Beck, and I managed to meet Mr. Costello after the Minneapolis show. The combination of alcohol plus the excitement of meeting my favorite musician of all time made me grasp at straws for conversation.

"Thanks for playing King of America," I slurred. Elvis smiled politely (just like in the above picture).

It was only later that I remembered that the song is, in fact, called "Brilliant Mistake." D'oh! Now I have the opportunity to put things right by shouting, "Brilliant Mistake!" at the Folk Fest. No doubt, Elvis will notice me in the crowd, remember me clearly from Minneapolis, and invite me up to sing "Brilliant Mistake" as a duet. Or not.

Tickets for the show are available here.
Posted by Kenton Larsen at 1:37 PM