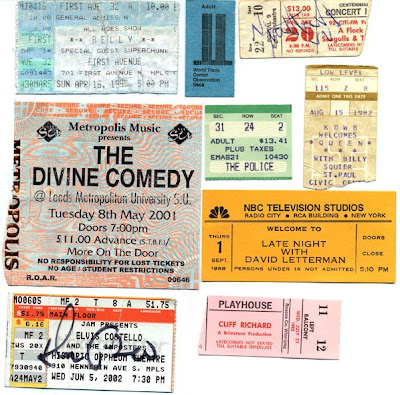 One of my most prized, tangible possessions (other than "myself") is the photo album in which I've collected ticket stubs to every concert and event I've ever attended, from Cliff Richard at the Playhouse in 1982 to Bloc Party at the Burton Cummings a few weeks ago.

I've been waxing nostalgic about my ticket-stub collection over the past few days, because I know that the next victim of the digital age will not be the newspaper, but my good friend, the paper ticket, and the decapitated "souvenir" version: the stub.

I came to this realization after first buying tickets to Coldplay. My only option: to print out a soulless Ticketmaster page that so doesn't look like a ticket, it has to tell you that "This is your ticket" at the top of the page.

If that ain't bad enough, I then bought tickets to Fleetwood Mac, and was horrified to find out that they're "paperless." Good for trees, bad for my ticket-stub collection.

Check out the list of paperless ticket "rules," provided to me by Ticketmaster by e-mail and phone:

"IMPORTANT REMINDER: You will not receive paper tickets for this event. To enter, you must present the credit card used to purchase your tickets. We ask that you also bring along valid government photo id (such as a Drivers License or Passport) to ensure smooth and timely access to the event. Your entire party must enter the venue at the same time. Tickets are non-transferable. All patrons will be subject to a security search...

Yeah, I'll be sure to do that.

The ticket has always been the tangible remembrance of the intangible event - without it, people may be more inclined to pick up a quality item at the merch table for, I'm sure, a low, low price. Charlene from Regina weighs in on the CTV talkback page:

"I have saved every ticket stub from every concert I have ever attended. I have them glued into a scrapbook with a date and who I went with, and where it was held, sometimes a comment about the concert (whether or not I enjoyed it). It's a whole lot less expensive (than the) t-shirts they sell at these things and I can look back with my friends, and remember the good-old days when tickets were $20, and we had to scrounge for that kind of money. Without a ticket stub what will I do?"

Other questions:
It doesn't help Ticketmaster's argument to consider that it has been routing people to its own ticket-scalping site, TicketsNow, when tickets are "sold out" on its own site. Concert tickets are quickly becoming airline tickets: the ticket price has very little to do with what you actually pay.

Every ticket tells a story

I love flipping through the ticket stubs, marveling at the tickets themselves: design, color palette, and font (dot matrix to laser!).

Good job on those square Arena ticket stubs in the early 80s (The Fyxx! Tears for Fears! the Tubes!), bad job on those green and purple tickets of the early 90s, where someone really needed to change the printer ribbon (Moxy Fruvous! Soul Asylum! Kids in the Hall!).

I also love "the memories," many of which are surprisingly bad:
Ticket prices

Another reason I love to flip through the old ticket stubs is to marvel at how little a concert ticket used to cost. The old argument was that "shows are for "the kids" and the kids don't have a lot of money."

Green Day was still towing this line in 1994 when it played Les Rendezvous for a measly $11 a ticket. New Green Day ticket price: $59.50. Low by today's standards, but five times higher than 1994.

The great 2003 documentary, Festival Express, chronicles Janis Joplin - and a host of great bands - as they tour Western Canada in 1970. It's hilarious to find out that the big controversy of the day was that the bands dared to actually charge admission to the show. Honest!

You can see Roger Ebert and Richard Roeper review Festival Express, and marvel at the Winnipeg mayor (I believe that it was actually Edmonton), who took up the free admission cause here in the At the Movies database.

It's funny to consider now that David Bowie's first concert in Winnipeg - the 1983 Serious Moonlight Tour at the Stadium - was controversial in its day for charging the huge sum of $20 a ticket. "And how are we supposed to buy beer as well, Mr. Bowie?"

Twenty years later, I spent $70.50 a ticket to see Bowie at the arena, not so much as a grumble to be heard. The next time he comes through town, I wager it'll cost about $300.