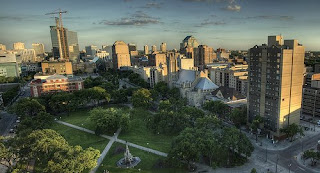 Winnipeg's Central Park as photographed by Bryan Scott (winnipeglovehate.com)*.
Does this look scary to you?
Today I bought a tiny condo in the heart of Winnipeg, in a character building just off of Central Park.

The park is getting a $6 million facelift from the government, but that's not the reason I bought there; I truly love the vibe of the neighborhood and believe in its potential to become one of the city's most interesting places to live and visit.

I'm renting out the place in the short term, but it would make a great office or, as the real estate agent says in the ad, "grt (sic) second residnce (sic) when the old lady kicks you to the coach (sic)." Is that funny because, or in spite, of the typos?

I became familiar with the Central Park area a year ago, when my grandmother moved into the seniors' centre at the northwest side of the park, just months before she passed away. The complex is an interesting and entertaining place: one day an elderly man rolled up in a wheelchair and confessed, "My downfall was always the hookers!" Ha!

However, the first thing that almost any Winnipegger would quickly point out is that Central Park is among the most dangerous places to live. "It's the hood," a friend of mine always says, half joking.

This wasn't and isn't my experience, or Wikipedia's, as it turns out:

"The area has been transforming in recent years. Its Central Market for Global Families is a summer outdoor market that sells handmade and imported African clothing, beadwork, handicrafts, weavings, art, as well as organic produce.

"Live entertainment fills the air in Central Park on warm Friday nights throughout the summer and are a significant aspect to the markets on Saturday. Special events attract hundreds of people to the park on World Refugee Day in June, and HIV/AIDS Awareness Day in July."

Central Park is apparently home to 70 per cent of Winnipeg's refugees and is one of the city's "most densely populated" areas, with almost 14,000 people per square km.

Of course, gentrification is always an issue, and a complicated one at that; however, I think that most would agree that there has to be some infrastructure improvements, private-sector investment (restaurants, bars, grocery stores, etc.), and beautification to make the area better than it is, but still in reach of new immigrants' limited budgets.

Which brings me to my second and sort-of related point about some other local investors: every Winnipegger who has already donated money to the Canadian Museum For Human Rights - a worthwhile endeavor, but seemingly much more expensive than the $265 million we were led to believe.

Today the museum told the Winnipeg Free Press that it needs another $45 million.

Policyfrog says, "You should all be fired."

Progressive Winnipeg says, "How long will they keep up the charade?"

I say, "I know a guy who could build a stuffed penguin museum for less than $1 million."

*Thanks to Bryan Scott for permission to use his photo.
Posted by Kenton Larsen at 9:23 PM