A doomsday clock will save the newspaper: the NY Times 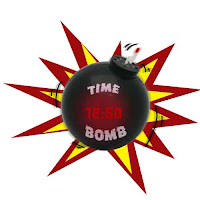 John Koblin at the Observer reports that the NY Times is considering two ways to get people to pay for online content:

"...in which the reader can roam freely on the Web site until hitting a predetermined limit of word-count or pageviews, after which a meter will start running and the reader is charged for movement on the site thereafter."

"In this model, readers pledge money to the site and are invited into a "New York Times community." You write a check, you get a baseball cap or a T-shirt...an invite to a Times event, or perhaps, like The Economist, access to specialized content on the Web."

Proposal number one sucks on so many levels, it's hard to know where to start. How about here: You want people to spend LOTS of time on your site, not race through it before the charging starts.

As Jeff Jarvis at Buzzmachine says:

"Readers’ inner dialogue is not hard to imagine: ‘Uh-oh, should I read that next story - and see that ad and maybe find something worth linking to and bring in other readers? It might start costing me. I’d better conserve my Times characters; they’re adding up; already read 20,000 of them. I think it’s time to go elsewhere now."

Proposal number two isn't necessarily a bad thing, but will it generate enough revenue? Slate Magazine attempted the same thing in 1998, when it started charging for its online content by offering a free umbrella. It didn't work.

However, as an advertising guy, I like Slate's attempt to make an intangible product (online content) tangible by offering the umbrella. Though it may change in the future, we humans have proven that when we spend money, we like to get something in return that we can take with us, hold in our hand, and/or "consume."

Of course, there's always the Jane Siberry/Radiohead solution (Siberry thought of it first!): "If you like what we do, pay us whatever you like."

I love the NY Times, and pay dearly for the only hard-copy edition I can get in Canada: the Sunday Times, which arrives on Monday with the Globe & Mail. That said, given the choice between no Times or paid Times online - I'd take paid Times online.

But if other news agencies followed suit, wouldn't that ruin the great promise of the Internet, where the vast sum of human knowledge is all stored in one place and accessible to everyone?

Let's hope this Internet thing is just a fad.
Posted by Kenton Larsen at 11:27 PM