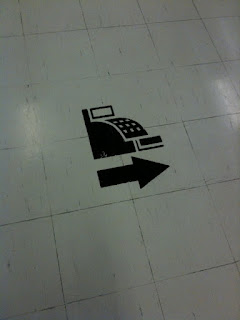 Ka-ching! This way to Olympic merch.
Let's hear it for the Bay.

After years of stagnant sales and ill-advised marketing strategies, HBC finally struck gold with its Olympic merch: its red, wool mitts are selling for $30 on eBay, its website crashed from user overload, and the low supply is making demand grow, even after the Olympics have ended.

The success is due to the collision of pent-up patriotism and cool designs that celebrate the Olympics, but feature enough of HBC's classic heritage to avoid just being a souvenir. These are clothes that can be worn all the time, not just on Canada Day.

I'm glad for the Bay, because I've always been a fan. Every time a girlfriend dumped me - and that's hundreds of times, people! - I'd go to the Bay downtown for a malt and hot dog in the basement, and it made everything better. You hear that ex-girlfriends? I'm betttteerrrrrrr! Waaaah! 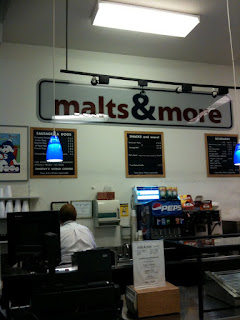 I'll have a malt and more, please.
I visited the Bay downtown today for a malt and a dog and - I admit it - I wanted to buy one of those kick-ass reindeer sweaters Team Canada was wearing at the closing ceremonies.

CreComm student Greg Berg tells me that the sweaters go for about $350, but since I'm Moneybags Larsen, no price is too high to be on the forefront of Canadian chic.

But when I arrived at the store, I was greeted with this, a pathetic display that still pleaded with me to "Believe" in light of all evidence to the contrary: 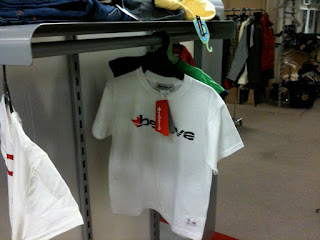 Even sadder was this baseball cap sitting atop these empty shelves, just begging for someone to add an apostrophe T to the end of CAN. I didn't - but I almost bought it to rescue it from its loneliness. 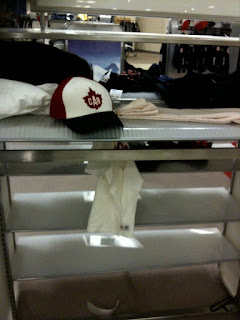 A lovely store employee named Louise told me that most of the Olympic merchandise sold out daily within about half an hour of the store opening.

"I got myself some of the mittens," she said. "But I had to do some sneaking around to get them."

It's about time. I used to use the Bay as a rebranding assignment with third-year Graphic Design students, mainly because anyone who cared could tell that the Bay was headed down the wrong path and just begging to be fixed.

It didn't help that I could never tell that the "B" in the Bay logo was actually a "B." Just looked like a ribbon to me...

Having traveled through Japan, I can say that having the Bay's maple syrup on your person is better than having actual currency. You can use it to get rides in cabs, stay at people's houses, and, I presume, to have anyone whacked that you like. When the syrup runs out, so do the favors, so if you're planning on doing the same: trade wisely.

The Globe & Mail reports that HBC's Olympic sponsorship is expected to have a long-term impact on the brand. It says that consumer awareness of HBC is higher than any other Olympic sponsor, and the goodwill toward the games and Olympic paraphernalia appears to be rubbing off on the store and other merchandise.

Yay! But, more fundamentally - and as a lifelong Bay shopper - here's what I think the Bay should do to keep the momentum going:

1. Change its name back to the Hudson's Bay Company. C'mon: HBC is soooo KFC.

1. Stop hiding the checkouts. That cash register stencil on the floor with an arrow leads nowhere.

2. Stop understaffing the checkouts. Louise can't do it all, you know.

3. Stop the sales staff from telling me that the product I'm buying is cheaper elsewhere.

4. Stop the sales staff from telling me to come back on Saturday - "Bay Day!" - when the product will be cheaper.

5. Stop the sales staff from giving away the merchandise when they're not sure if an item is on sale. 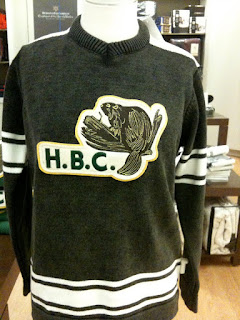 Posted by Kenton Larsen at 9:49 PM