Winnipeg Fringe Fest: remember, it's the reviewers who suck 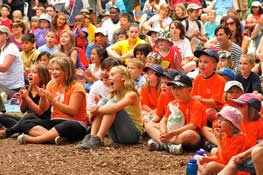 Kids enjoy watching a Fringe reviewer fall off the stage.
As someone who loves live theatre, I really enjoy the Winnipeg Fringe Festival.

But as a veteran performer of six Fringe Festivals, I can't look at a Winnipeg Fringe Fest poster without feeling mildly nauseous. To borrow a line from Chris Rock, I look at the Fringe Festival as "the uncle who paid your way to college...but molested you."

Of course, the Fringe Fest is a lot of fun on its face: there's a beer tent in Old Market Square, teeming with people having a good time, after all. But take a closer look, and you'll see that they're mostly all performers, actors, musicians, and comedians. Laughing on the outside, crying on the inside. Drinking to forget.

For any performer, the Fringe Fest is a true test of wills. It takes a hell of a lot of work to set up a Fringe show: producing the advertising, staging the show, rehearsing, and dealing with the other actors, volunteers, venue owners, and tech crew. By the time the audience files into the venue, it suddenly hits you: oh, crap, we're putting on a show!

So, you do it, because there are people there, they've paid $5, and - being Winnipeggers - want $50 worth of entertainment. You put yourself out there, and give it your all. You sweat, bleed, and cry (just like Blood, Sweat and Tears did!).

Some nights it works. Some nights it doesn't. And these are the nights the reviewers show up to "reward" you for all of your hard work.

Judy Garland and Mickey Rooney never had it so tough.

You don't realize how little reviewers know and how (pardon me) "bullshit" their reviews actually are until you yourself are reviewed. And I say that as someone who has got everything from two stars to four stars at the Fringe. I disagreed with all of them, even the good ones.

As the old saying goes, "Opinions are like arseholes - everyone has one, but no one wants to hear it."

With that in mind, here are the different kinds of reviews this year's Fringe Fest performers can expect from the local media," proud supporters of the Winnipeg Fringe Festival:"

There is such a thing as an "informed" review, where the reviewer knows a lot about what you're doing and comes to an opinion based on what they know. These reviews are OK; though you might disagree with the opinion, it's hard to fault an informed person with what they think about something they've experienced.

Unfortunately, there are a shortage of reviewers and reporters kicking around most media outlets, so they instead hire people with nothing to do over the summer to help them out. Maybe they're writers. Maybe they're critics. Or maybe they're just unemployed because the Pan Am pool wasn't hiring life guards this summer.

The Winnipeg Sun, for instance, put out a call recently for people who would like to review Fringe shows. The problem, of course, is that most anyone isn't an informed reviewer. Which means we're stuck with the next, big category of reviewers most of the time.

Probably the worst review I ever had was just two years ago (and no, I'm not linking to it. Ha!). A young reporter from the Free Press came to see our little comedy show at the King's Head and, quite simply, didn't get what we were doing.

I know that humor is subjective. And I don't expect everyone to find my jokes hilarious, or to even like me as a person. But this reviewer said that I had no punchlines. Uh...that's just not correct. As someone has performed stand-up comedy for over 10 years, I can say that I know a punchline when I see one. You may not like my punchlines, but they're there.

To the uninformed reviewer who says, "It's just my opinion," I give you Roger Ebert, defending his Transformers review:

"So let's focus on those who seriously believe "Transformers" is one of the year's best films. Are these people wrong? Yes. They are wrong.

"I am fond of the story I tell about Gene Siskel. When a so-called film critic defended a questionable review by saying, "after all, it's opinion," Gene told him: "There is a point when a personal opinion shades off into an error of fact. When you say 'The Valachi Papers' is a better film than 'The Godfather,' you are wrong."

"Quite true. We should respect differing opinions up to certain point, and then it's time for the wise to blow the whistle."

Why don't music reviews ever work in a college newspaper? Because all the reviewers review their favorite bands and, by definition, give them the highest rating.

"This Monster Magnet CD will totally change the world!" Only for you, reviewer.

Sometimes this rears its ugly head at the Fringe. The gay critic goes to the gay-themed play and - surprise - loves it! Or, the heavy-metal guy goes to a children's musical and - surprise - hates it.

It is possible for reviewers to be aware of their biases and reveal them in their reviews, but this rarely happens.

The Free Press' Morley Walker really hates local improv group the Crumbs. At least that's what the Crumbs think. And each year, their show becomes an improv version of "Waiting For Godot," with Morley playing the role of Godot. Will he be back this year? Will he hate us again? Should we ban him from the performance? Etc.

The reviewer is likely aware of this, since it plays into his or her ego and belief that "I'm changing the world with my reviews." Which means that the review is usually about the grudge, not the actual performance.

This is a local variation on the biased review. Winnipeg is a small place, and local reviewers constantly review shows starring their friends, usually forgetting to mention it in their reviews.

This has happened to me a lot. I've always been in a stand-up comedy show, and the person reviewing the show for the CBC is usually a stand-up comic, with whom I'm friends.

Usually, this leads to the review being very, very positive. When you get a great review from a friend, though, it's like getting a kiss from your little sister. Yeah, a girl kissed you, but it doesn't count.

Perhaps the most biased review I've seen was one by the Fringe critic for CBC, who is also a local stand-up comic, knocking the crap out of one of my comedy buddies, and telling him to "give it up."

Having seen this "critic" perform numerous times at Rumors, and being very familiar with his material, I know that he hadn't written a new joke for at least five years, was still telling "flood of the century" gags, and read his jokes off of a sheet of paper. He also introduced new comics at Rumors as "shit." No joke! But no one could criticize him, because he was the guy from CBC!

You tell me who should be "giving it up."

6. The "you shouldn't be here" review

You put on a comedy show. You make the crowd laugh. They leave satisfied.

Then the Free Press writes an article about how stand-up comedy has no place at the Fringe, because it's mainstream entertainment that squeezes out "serious theatre" (sorry, I can't find the link).

The crowd starts to get a little smaller. The people in the audience don't seem to be having quite as much fun. Theatre groups start lookin' at you funny. Then the Free Press reviewer shows up and makes it a foregone conclusion: see, I told you that comedy has no place at the Fringe!

All is fair in love and Fringe

The worst part about it is that people really believe the reviews they read. My dad himself once called me and said, "So you're not having a good run at the Fringe Fest, eh?" after reading the Free Press review. In fact, we had full houses, with people doubled over in laughter on a nightly basis.

"The reviewer is a prick," I responded, confident that it made me look petty and like a bad sport.

And to the wise ass who says that this review is all of the things I criticize above, you're right. But revenge - and one's own medicine - are dishes best served cold. Am I right, people?

Please do me one, last favor: when you're reading this year's Fringe reviews, in the immortal words of Chuck D (not Flavor Flav), remember: don't believe the hype.
Posted by Kenton Larsen at 9:51 AM