Live From New York: it's my favorite book about comedy! 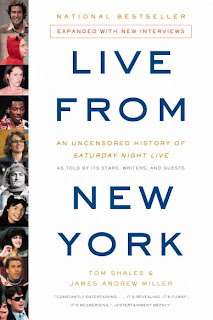 There, I said it.

Sure, there have been exceptions, like the four seasons featuring Eddie Murphy - "SNL's Elvis," as Chris Rock calls him.

But for a Canadian growing up on SCTV, Monty Python, and Kids in the Hall, SNL never quite seemed to be all there: one-joke premises beaten into the ground week after week, actors trying too hard to be cool instead of funny, sketches that ended when the applause sign came on, not when they reached a satisfying emotional climax, and so on.

So, it comes as a surprise to even me that my favorite, time-tested book about comedy is Tom Shales and James Andrew Miller's Live From New York: An Uncensored History of SNL. I've read it once a year since it came out in '02, and continue to get stuff out of it that I forgot or missed the first five or six times 'round.

Keeping exposition to a minimum, Shales and Miller let the players speak for themselves, and the result is the best comedy primer out there. It also dishes a lot of insider dirt. As Amazon.com talkbacker John S. Harris says, "This is better than an E! True Hollywood Story any day."

The first thing that you notice when you pick up the book is that it's damn heavy. The sheer volume of quotations that Shales and Miller have compiled is truly worthy of the "exhaustive oral history" moniker; the book is jam-packed with insider information and juicy gossip, and - best of all - it's not just a celebration of the show.

Take these quotes from the book:

"I think it was just such a miserable experience that I have sort of blacked out a lot. That whole year, I was just embarrassed," says Chris Elliott of his year-long experience on the show.

"It was a Maalox moment every five minutes. I had irritable bowel syndrome every day. My drinking just got out of hand. I would credit SNL with being very instrumental to some bad habits that certainly increased. I wanted to quit after the first week," says Janeane Garofalo in a typical SNL-bashing quote.

I quote Elliott and Garafalo not only because I like 'em as funny people, but because they both never really made it on SNL, despite already being successful comics beforehand. Also because I was working at 30 Rock at the same time they were SNL castmembers, and I was miserable much of the time too.

When things were slow, I'd take the elevator up to the SNL floor to wander around and see what was going on, and - more importantly - make free, long-distance phone calls on any unmanned phones I'd come across.

In my travels, I'd occasionally get a glimpse of one of the SNL stars in the hallway (I saw Adam Sandler once and, um, NBC anchor Tom Brokaw), look at the photographs of the SNL alumni hanging in the hallway, and pose for photos in the SNL studio when no one was looking: 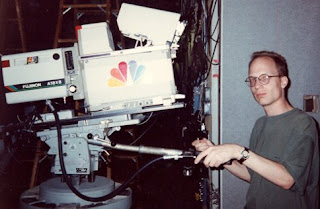 I'm shooting here!
While I may never have much cared for SNL, there's no denying that old-school, live-TV-excitement vibe that radiates from Studio 8H, even when the show isn't in production.

I always just assumed that everyone at SNL was having a party and getting paid for it while I wasn't.

In fact, it may be only show creator Lorne Michaels who is livin' the life of Champagne wishes and caviar dreams, on the back of everyone else's misery. The book casts Michaels as an all-powerful father figure to the castmembers, loved by some, feared by many, and inscrutable to all.

"Lorne and I stopped speaking. It was during the second year," says former castmember Jane Curtin. "Lorne doesn't deal with issues, so I thought, well, this is pointless, I'm not going to talk to him anymore."

"Lorne a snob? Sure he's a snob," says writer Tom Davis. "He's a starfucker of the highest order. But you have to get past it."

Michaels himself is interviewed extensively in the book, but - unlike Citizen Kane - there's no Rosebud, so at the end of the book, we don't necessarily feel like we understand Michaels more than we did at the beginning. Which is the point.

Whether Michaels aims to be inscrutable or it just happens by accident is anyone's guess. However, it may be telling that it's a Michaels impression that Mike Meyers is doing when he plays "Dr. Evil" in the Austin Powers movies - which Meyers has been accused of stealing from castmember Dana Carvey.

"Part of it's because he's an alien, you know - a Canadian. They have sort of like British echoes they have to fulfill. They have to go to Wimbledon and they have to do stuff like that we Americans don't really feel anything about."

The big star of the book is, ironically, the one notable person who didn't agree to be interviewed: SNL's biggest star, Eddie Murphy. As a result, the book at times becomes a bit like "Waiting For Godot" with Murphy in the title role.

Shales has said that it's still his dream to interview Murphy for an upcoming edition of the book, but it doesn't look good, as Chris Rock says in the book:

"(Murphy) won't talk to anybody about the show. He's done with it. He's not bitter about it, he loves it. He totally credits the show.

"I don't want to speak for him, but I think he does get pissed when they make fun of him, only because the show would have gotten canceled if he hadn't been there. There would be no show.

"(John) Belushi didn't have a movie as big as Trading Places, and that's not even Eddie's biggest movie. Blues Brothers is not as big as 48 Hours. It's not. Animal House had a cultural impact, but Belushi's not the star of Animal House, he's the breakout guy. It was still an ensemble; he was the best of the ensemble. Eddie Murphy's a star, man."

The interesting thing about Murphy's success is that it's all attributable to his own hard work: at age 18, he gets an audition on the show only after pestering an SNL talent coordinator from a pay phone. He kills at his audition, but only becomes a "featured player" on the show, because then-producer Jean Doumanian likes another actor, Robert Townshend, better.

Murphy gets relegated to the sidelines for a season, but gets his big break when a show comes up 15 minutes short and he's asked to fill the time with the piece he did for his audition. The piece kills, and he becomes the biggest star in SNL history, with all the trappings of fame: million-dollar cheques, an entourage, and sadly, death threats.

A book is only as good as its villain, and this book has a good one in Chevy Chase, the first season's biggest star. Although he comes off as a thoughtful, regretful guy in his interviews, he appears to be universally despised by anyone who has ever worked with him.

After leaving SNL after the first season to become a movie star, Chase comes back in the second season to host the show, and Bill Murray punches him in the face moments before the show goes to air.

"I was probably a little too full of myself," says Chase. "Maybe I'd been somewhat of an asshole."

"I don't know Bill Murray, but he's screaming, you know, foaming at the mouth, "Fucking Chevy," and in anger he says, "Medium talent!" says director John Landis, who witnessed the bust-up.

"When you become famous, you've got like a year or two where you act like a real asshole. You can't help yourself. It happens to everybody. You've got like two years to pull it together - or it's permanent," says Bill Murray.

The chapters dealing with the deaths of John Belushi, Gilda Radner, Chris Farley, and Phil Hartman are worthy reminiscences of some of SNL's most talented cast members (maybe Billy Joel was right), and it's nice to see the book give weight to cast members who never made much of their time on the show, like Chris Rock, Chris Elliott, Anthony Michael Hall, Jim Belushi, and Julia Louis-Dreyfus.

What the book really gets right is what I hope Judd Apatow's new "Funny People" movie gets right: what it's like to be a comic working in a high-stress environment with other stand-up comics, all desperate to make a name for themselves.

It's laughs sometimes, but it's mostly competition, gossip, backstabbing, jealousy, and sour grapes. Great comedy - and books - are made of these.

If you like this book, you might also be interested in Jay Mohr's "Gasping for Airtime: Two Years in the Trenches at Saturday Night Live" in which he reveals running home during the show after he has a panic attack, and being so desperate to appear on the show that he plagiarizes another comic's act.
Posted by Kenton Larsen at 1:11 PM