Rock of Ages: the ultimate musical for metal heads and straight dudes 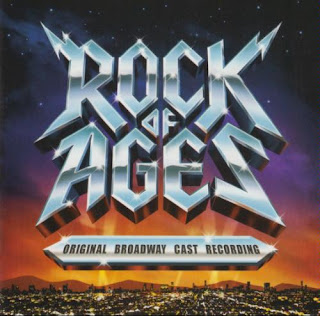 Then, imagine their so-bad-they're-great songs on a Broadway stage: "Any Way You Want it," "Every Rose Has a Thorn," "Just Like Paradise," "Heat of the Moment," "We Built This City," and "Sister Christian."

Imagine no more. It's not the unholy hard-rock nightmare that it first seems, it's more like heavy-metal heaven: Rock of Ages, the arena-rock jukebox musical, and soon-to-be film built around classic 80s rock.

As Variety points out, this should really suck. Yet, it also makes perfect sense: why see "Hair" on Broadway when you can see "big hair" on Broadway?

I got the soundtrack from Amazon.com yesterday, and I'm not even a little embarrassed to say that I listened to it for four hours - all the way to and from West Hawk Lake - and I'm still "lovin' every minute of it." Thank you, Loverboy (who, sadly, is not represented on the album).

The production walks a fine line between respect for and mockery of the hits, which is what makes it so fun: you could just as easily appreciate the music from a nostalgic perspective as you could laugh along with it for being so silly.

Recorded and mixed by Michael Barbiero, who did Guns N' Roses' best album, "Appetite for Destruction," the album happily doesn't go down the path of "Broadway rock" (say, for argument's sake, Angela Lansbury singing showtunes from "Rent"), but instead truly rocks in the best sense of the word.

As a straight dude who loves musicals myself, I always wondered whether a musical would ever come along that wouldn't be embarrassing to say you loved: Rent came close, as did The Who's Tommy, but Rock of Ages may have finally hit the sweet spot.

"Chicks don't trust their heart or virginity to a guy who says he's straight but owns the "Annie" original cast recording," says D'Arienzo.

Mash-up heaven (isn't too far away)

The musical's storyline is secondary to the music; the narrative has something to do with a metal head who sweeps floors while awaiting rock stardom, only to have his chick stolen by the lead singer of a Poisonish band. Of course, our hero must win her back. And probably does.

There are snippets of stage dialogue interspersed with the songs; probably just enough to know what's going on, but not so much as to ruin one's enjoyment of the original hits.

All else you need to know is that one of the main characters is called "Sherrie," so there can be a Steve Perry moment in there somewhere: "Shoulda been gaw-awne!"

The happiest surprise is that many of the songs aren't performed "as is," but as metal mash-ups; some of them are so unexpected and great, you can't help but burst out laughing the first time you hear them.

Consider Starship's "We Built This City" as segued into Styx's "Too Much Time on My Hands." Or Quarterflash's "Harden my Heart" remixed with Pat Benatar's "Shadows of the Night." Or Joan Jett's "I Hate Myself For Loving You" alongside Asia's "Heat of the Moment."

The funny thing is that I used to hate a good chunk of these songs when they were actually new releases; but, as the New York Times reviewer Charles Isherwood points out in his review of the musical, "Time can play appalling tricks on taste:"

“Don’t Stop Believing” and “Waiting for a Girl Like You” and “We Built This City” are not the musical equivalents of classic Bordeaux vintages, but I never would have guessed that wine coolers could age this well."

Bravo. That's the best explanation I've heard for owning an album with not one, but two Foreigner songs (and neither one being "Jukebox Hero").

Rock of Ages is good, clean heavy-metal fun; irresistible to metal heads and straight dudes everywhere, who may trade in their "We're Not Gonna Take it" stance for a little "Heaven Isn't Too Far Away." And is that really such a bad thing?

As Night Ranger once sang: "Motorin'!"

Listen to music samples at the official Rock of Ages site here. And just because it never gets old...the cast sings Journey at the Tony Awards:


Best parts: 1. "Michigan!" and 2. My new favorite dance move that happens when the girl sings, "midnight train." Get it? She's a train. Aww, forget it.
Posted by Kenton Larsen at 9:41 AM