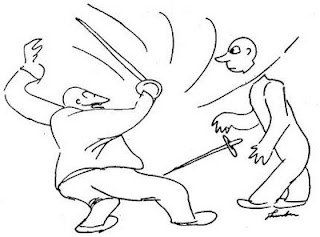 Now that you've stopped laughing, I'm happy to point out that Roger Ebert - film critic for the Chicago Sun-Times, has taken a page out of comedy writing class by offering a full analysis of the New Yorker's Cartoon Caption Contest.

Mainly, Ebert's miffed that he's been entering the magazine's contest weekly since it began, and has never even been a finalist.

"I have done more writing for free for the New Yorker in the last five years than for anybody in the previous 40 years.

"It's not that I think my cartoon captions are better than anyone else's, although some weeks, understandably, I do. It's that just once I want to see one of my damn captions in the magazine that publishes the best cartoons in the world. Is that too much to ask?"

Because for the past three or four years, I've begun the comedy writing class by handing out a randomly selected cartoon from the caption contest, giving the students 15 minutes to come up with a hilarious caption, then having them present it in front of the class.

In some ways it gives the students an unfair advantage: delivery is a big part of any joke, and no one else who enters the magazine's contest gets a chance to deliver the joke out loud and in person.

In other ways, it's torture: comedy writing is hard, especially under pressure. And what's hilarious to you might not be as hilarious to other people. And it's really, really hard to get up in front of people to say anything when the expectation is that you will make them laugh.

But when you compare captions written by 40 students, you very quickly realize which ones are "too obvious" (if five or more people come up with the same caption, that's usually a sign), "too oblique" (the only people who'd laugh at the joke wear monocles and top hats), or "too dirty" (I stopped handing out the cartoon of the doctor examining the giant hand - too many giant penis jokes, I'm afraid).

As well, in comedy writing class, we're all "comedians." As Billy Crystal is wont to point out, the biggest "laugh" you can ever get from another comedian is to have him listen to your joke and offer the deadpan response: "Funny."

Now, Ebert is upping the ante:

"The first contributor of a post to this blog to become a finalist in the New Yorker competition will win, in addition to the fame and glory of seeing their caption in print, a shiny new dime. That's ten cents more than the New Yorker will give you. We pay postage."

That's 10 cents U.S., my friends. The caption contest is open to all Americans and Canadians, except for people who reside in Quebec. Funny. 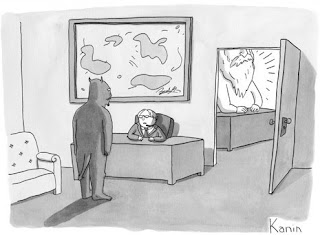