Will you do your part in the Donut Wars? 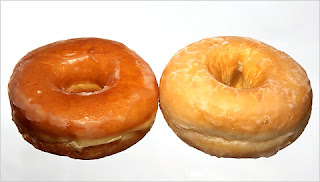 My first hint that something's up in Manhattan this week was when a relative visiting from New York knew all about Tim Hortons setting up shop in Manhattan, where it's very easy to get distracted and notice nothing.

The second hint was when I read yesterday's New York Times; of course, the press in Canada covered this news item, as it is legally obligated to do with any information about Timmy Ho's, but I hadn't realized how the American press had considered it to be akin to a Canadian invasion: the Donut Wars!

While the article in question isn't about Tim's vs. Dunkin's per se (Headline: "Fois gras palates, hot dog pocketbooks"), it uses the Tim Hortons "controversy" as its lead:

“The donut wars,” several blogs and news organizations called them, as if a platoon of cinnamon crullers were advancing on a phalanx of glazed. The dispatches from the front were numerous — and impassioned. This was clearly a contest of the utmost consequence.

"It pitted Tim Hortons, a Canadian doughnut leader, against Dunkin’ Donuts, an American one. Last weekend, Hortons invaded Manhattan, displacing a dozen Dunkin’ stores and girding for battle with the rest.

"But while this development could have been covered and discussed merely as a business story or even a parable of international comeuppance, it was almost instantly analyzed in epicurean terms. Which of the two fast-food chains fried a finer circle of dough? And how did the Hortons nuggetlike Timbit stack up against the shrunken Dunkin’ Munchkin?"

I'm intimately acquainted with both fine establishments: I work at Red River College's downtown campus in Winnipeg, where eating at Tim Hortons six times a day is not only a rite of passage, but a way of life.

And I used to live in Cambridge, Massachusetts, where there was a Dunkin' Donuts not more than a 10-minute walk up Mass. Ave. from our house.

I can't say I've ever noticed a difference in the quality of the donuts, though I do recall the Dunkin' Donuts being in major need of a wipe with a moist towelette. Not the donuts themselves, but the entire establishment, from top to bottom, starting with the staff.

Researching the sources laid out so helpfully by the New York Times, in addition to some of my own, here's how the battle looks so far:

The Result: The Daily News gives the edge to Tim Hortons, which wins by a six-to-five margin among tasters in Times Square.

Key quote: "It's from Canada? Wow, they are making good doughnuts."

The Result: Urbanite gives the edge to Tim Hortons, by a five-to-three margin.

Key quote: "Tim Hortons is most famous for its coffee, and tasting it yesterday, we think it could really give Dunkin’ and Starbucks a run for their money."

The Result: A rout; 11 out of 16 people preferred Dunkin' Donuts.

Key quote: “I don’t care if it’s from Canada,” said Steve Cianciotto, “as long it’s not from Jersey.”

The Result: A terrible experience with Tim's customer service leads to Dunkin' winning by a slim margin.

Key quote: "Really they both lose because we’ll never buy doughnuts or coffee from either one again. They both suck!"

The Result: Tim's has a slight edge in the honey glazed, Dunkin's has the edge in the old-fashioned category. Still, when pressed, this blogger gives it to...Peter Pan Donut. Huh?! Next time I'm in Greenpoint, I'll have to give it a try.

Key quote: "It turns out Tim Hortons doesn’t stock a jelly donut, which is one more reason to eye Canadians with suspicion."

However, if Salisbury House ever opens in Manhattan, McDonald's had better watch out; I'm pretty sure Burton Cummings could take Ronald McDonald in a cage match brawl...anyway, time's a-wastin'.