My 1977 Chevy Nova: the original Toyota! 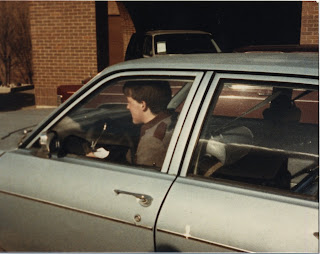 Pimp my ride:
A valet at the Sheraton commandeers my pride and joy.

Meet my first car: the 1977 Chevy Nova, aka the Titanic of the Road.

I don't remember even wanting the car specifically, but when I turned 18, it was all that I could afford. I purchased it in 1986 for the very reasonable price of $1, which I dutifully paid my mother after she'd driven it into the ground over the previous nine years, and I never looked back - just like Bob Dylan and Boston.

The great thing about domestic cars built in 1977 is that they were all extremely unsafe by today's standards. But to make up for it, they were built out of solid steel, so that anything you hit would be crushed like a melon and you'd be safe somewhere inside the hulking frame.

In fact, the 77 Nova was so big, when you drove it you couldn't see the road: "Hey, I hope I'm not killing anyone down there!" And when you parked it, I swear, you'd have to wipe Volkswagen Beetles off of the grill.

Best of all, my Nova had the same problem as the current crop of Toyotas: out of nowhere, it would suddenly start accelerating; the only way I could stop it was to physically stick my foot under the accelerator and lift it back up, reach down with my hand to do the same, or stick my feet through the rusted-out floorboards like the Flintstones.

Yes, there were holes in the floor, but I considered this to be akin to taking a cruise in a glass-bottomed boat. It's not the journey, it's the view. Or something...let's move on.

But there was no recall (or airbag or seat belt, come to think of it). Yet I never once thought of the sudden acceleration as a safety hazard; it was more of a "what did you expect for $1?" mindset than anything.

And no one in my family ever expressed so much as an ounce of concern about my safety. If the car accelerated uncontrollably, it just meant that I could get to their house for dinner that much faster.

Sadly, my Nova days came to an end when someone stole it out of the Polo Park parking lot. How desperate do you have to be to see a Chevy Nova in a parking lot and think, "Oooh. Sweet ride. Let's steal it!"

And a short 24 hours after it was lifted, it appeared in a farmer's field just outside of Calgary. No joke.

Autopac decided that it wasn't worth towing back, and no one was ever arrested for the crime. However, I don't think you have to be Perry Mason to figure out who lifted it:

I believe this to be true because when the cops found my car, there was a bunch of the cows hanging around nearby. And when the officers tried to interview them, they pretended they couldn't speak English. A dead giveaway!

And if you've ever watched COPS, you know what happened next. There was a scuffle. A chase ensued. Shots were fired.

And, to make a long story short, tonight I had burgers for dinner. All's well that ends well!

Thanks, for the memories, Nova! Munch, munch, munch.
Posted by Kenton Larsen at 2:20 PM