Play baseball with me, and you'll be famous too 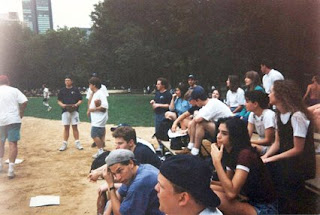 So, I was going through an old photo album yesterday, so I could Photoshop out the faces of my exes - but seriously - and I came across this picture from my days working on Conan O'Brien; this picture was a match-up in Central Park between baseball teams Conan and Letterman. Conan showed up, Letterman didn't show up.

And for the record: despite buying a new baseball glove and an official Conan hat and shirt, I never did get so much as to first base with the team (or even to left field, for that matter).

Instead, I got to sit on the bench with the very athletic Andy Richter, who you can see front and centre of the photo; and, as it turns out, with Sarah Silverman (to the immediate right on the picture).

Silverman had also brought her baseball glove to the game, and also wasn't allowed to play. Honestly: when will the uptight, protestant, middle-class, white Canadian boy and the Jewish American princess finally get their moment in the sun?

I recall that after the game, I shared a cab with Silverman, only having a very vague idea that she was even on Saturday Night Live as (kiss of death) a "featured player;" in fact, Ellen Cleghorne, who was also on SNL at the time, showed up at the game with her team of Doberman dogs, and got waaaaay more notoriety.

So, the point is: having big Dobermans might get you a minute of glory, but sitting on the bench and sharing a cab with Kenton Larsen will make you famous.
Posted by Kenton Larsen at 11:28 AM