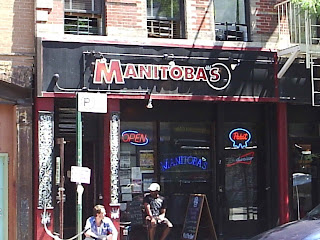 Of the zillion or so CDs that I have littered around my house, car, workplace, and feet, the ones that are nearest and dearest to my heart are the ones that land firmly in the category of "punk rock."

As former Clash-city rocker Mick Jones once sang with Big Audio Dynamite, "I didn't like jazz, I didn't like funk - I turned out a punk!" Same here, except I like jazz and funk too.

Lately, I've been getting into proto-punk band the Dictators, who somehow escaped my attention "back in the day."

I caught the reformed Dictators about six years ago at Little Steven's Underground Garage Festival in New York, and they won me over with their over-the-top bravado in songs like "Who Will Save Rock and Roll?" and lyrics like, "I wish Sgt. Pepper never taught the band to play."

Their first and best album is 1975's The Dictators Go Girl Crazy!, which is notable for lots of things, including its great cover of Sonny and Cher's "I Got You, Babe," the hilarious cover photo, and "its blueprint for bad taste, humor, and defiance (Village Voice)."

What was fast and loud in 1975 is lo-fi and downright charming today; I've had the thing playing in my car for the past two weeks, and it gets better with each listen.

The band's main concern is all things that male teenagers love: cars, girls, burgers, TV, surfing, the weekend, and more dumb jokes than you can shake a stick at. Example: in "the Next Big Thing:" "I knocked 'em dead in Dallas, I didn't pay my dues - they didn't know we were Jews."

The band is also home of our province's self-appointed spiritual leader, Handsome Dick Manitoba. As owner of Manitoba's bar in New York's East Village (see above photo), he's probably doomed to being visited by vacationing Winnipeggers until his dying day (much like New York's McNally Robinson bookstore, located just a hop, skip, and a jump away from the bar).

So attached is Handsome Dick to the name "Manitoba," he threatened to sue the artist formerly known as "Manitoba" for using it, even though Handsome Dick has never recorded anything under that moniker (his real name is the not-very-punk-sounding Richard Blum). Saying he couldn't afford the lawsuit, the other Manitoba changed his name to Caribou, which is sufficiently Canadian-sounding enough to not have caused much, if any, brand confusion among his fans.

It's worth noting that at the time of The Dictators Go Girl Crazy!, Handsome Dick was listed only as "Secret Weapon" on the album sleeve, and apparently considered by the rest of the band as being little more than their mascot. By their third album, he was the band's lead vocalist: an inspirational and uplifting story for any Manitoban.
Posted by Kenton Larsen at 10:04 PM