Cosby KOs Dylan in battle of the living legends 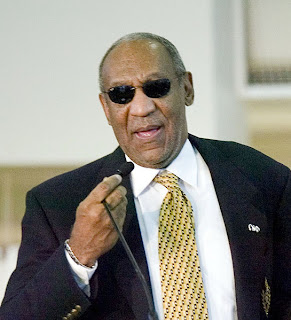 Who was better? Would you believe me if I told you that the answer rhymes with schmill schmosby?

This may be surprising, because in recent years, Dylan's mystique has only grown: releasing three awesome CDs in a row this late in the game after such a long career of peaks and troughs is probably unprecedented.

And those first 10 albums or so are one of the longest and most creative winning-streaks in musical history. As it says in the Rolling Stone Record Guide: "Look upon his works, ye mighty, and despair."

Having seen Dylan before - about 10 years ago and in the intimate confines of the Centennial Concert Hall - I knew pretty much what to expect, and that's what I got: he cranked out some hits, misses, and songs from his last (and great) album of new material, Modern Times.

Last time I saw Dylan, he performed with SNL guitarist G.E. Smith, who seemed responsible for absolutely everything that happened onstage, including physically propping up Dylan from time to time. No kidding: Dylan's feet never moved once during the show, but his upper body was all over the stage.

At the end of the show, one of my relatives made a statement that haunts her to this very day: "He didn't play Blowin' in the Wind properly." As anyone familiar with Dylan knows, beggars can't be choosers. You're lucky to even get Blowin' in the Wind at a Dylan show; and who's to say that he's not playing it properly? After all, the guy did write the song.

Back then, he even managed some between-song banter. He said, "You're a good crowd," and "It's a pleasure to be playing in Neil Young's hometown. It really is." The guy was a geyser of conversation that night - I geyser, I say!

So, it was in the spirit of not expecting too much that I attended Dylan's concert at MTS Centre. There were improvements over the last time I saw him: a spotlight on the man's face, his voice higher in the mix, the occasional 'lil dance that he'd do when he emerged from behind his keyboard, a band dressed in natty attire, and a set list that opened with Rainy Day Women #12 & 35, and the Times They Are A-Changin'.

The twist was that Dylan's band played all of the songs, including the classics, as though they were Doo-wop hits of the fifties; nothing wrong with that, but it's a bit off-putting to hear Like A Rolling Stone played by way of Dion and the Belmonts.

This time, Dylan said nothing to the crowd, and his band remained mostly anonymous and workmanlike throughout the night. Nothing terrible happened, but nothing too notable either. And, it's worth pointing out, that I've never seen more people leaving their seats on the floor to buy beer throughout a show in my life. Either Dylan wasn't connecting, no one has an attention span anymore, or both.

And Cosby? Many of his comedy albums are now out of print; even those in print have aged pretty badly. By today's standards, it's shocking to listen to his 1968 breakthrough album "To Russell, my brother whom I slept with;" not because it's not "funny" by today's standards, but because the comedy is so gentle, and Cosby goes so long without so much as getting a giggle.

Listening to 1963's "Bill Cosby is a Very Funny Fellow - Right" recently, I was overcome with that I-guess-you-had-to-be-there feeling, which is one of the last things you want people to think when they see or hear a recording of your stand-up.

And then there's the annual event in which I bring up the name Bill Cosby in comedy writing class, and I get at least one student who says, "Isn't that the guy who used to sell JELL-O and Coke and star on TV as that doctor who was married to that lawyer, but never seemed to work, and said "Theo" a lot?" I'm paraphrasing.

So, it was to my utter surprise that Cosby came out, far and away, as a better showman than the infamous Bob Dylan.

Sauntering out onto the stage without an introduction, Cosby sat down, blew his nose (he was setting up a later joke), and began talking.

The crowd was instantly mesmerized. Having performed stand-up a zillion times, and knowing how frigging hard it can be to get and hold an audience's attention, I couldn't help but stare at the faces of the folks sitting around me, back to Cosby, back to the folks, and wonder, "What the hell is this guy's secret?"

Live, Cosby starts out remarkably slow and deliberate. He tells a story about a girl's coming of age, and how all the women around her help her out when she "becomes a woman" as compared to the lack of respect a guy gets when he "becomes a man." Funny and knowing stuff.

Perhaps Cosby's best bit of the night is a story about how, as a young man, he hears his grandfather use the expression "out of wedlock," and wonders what it means. He goes home and asks his mother, who instantly assumes that he's gotten a girl pregnant. She orders him to his room, and sends his father up to interrogate him.

As any good comedian does with his or her material, Cosby wrung out every last nuance of the scenario's comic possibilities.

At this point, Cosby asked the audience, "What time is it?" He'd already done over an hour. Coming from most performers, this would mean that the show was almost at an end. After asking, Cosby did another full hour, ending with his classic dentist bit.

As Jerry Seinfeld points out in the documentary Comedian, doing comedy for this long is a huge, physical effort. And Cosby went over two hours on a night when he did two shows in a row. Mind-blowing, especially for a 70-year-old man. Hell, I do 15 minutes of stand-up, and I'm ready for a lie down.

As Cosby's dentist bit picked up steam, I saw tears of laughter running down the faces of the grown men and women around me. Here, the setups and punches came quicker, until Cosby said good night, walked off the stage to a standing ovation, and didn't return for an encore.

Oh, the Times They Are A-Changin'.
Posted by Kenton Larsen at 1:31 PM