The best Remembrance Day album of all time? 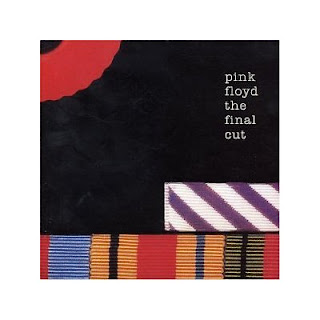 Often slammed as being "outtakes from the Wall," "a Roger Waters solo album," or "the album that finally broke up Pink Floyd," the Final Cut is my favorite Pink Floyd album, and perhaps the most thought-provoking CD you can listen to on Remembrance/Veterans Day.

The first sign that Pink Floyd's the Final Cut is, as Woody Allen once said, "total heaviosity" is its subtitle: "A Requiem for the Post War Dream."

Says Wikipedia: "Waters' lyrics explore what he regards as the betrayal of the British servicemen, such as his own father, who sacrificed their lives in World War II in the hope that victory would allow successor generations to build a better, more humane society based on progressive, humanist values, where political leaders would heed the lessons of the past and no longer be so readily prepared to resort to war as a means of settling disputes..."

In just 45 minutes, Waters tackles the Falklands War, Reagan and Thatcher conservatism ("Oh, Maggie, what have we done?"), and the fate of servicemen after the wars ("You can hide, hide, hide behind paranoid eyes"). And it all culminates with the promise of a nuclear war ("Could be the human race is run").

Dark, yes, but the music, mostly acoustic, is some of the most beautiful that Pink Floyd ever committed to vinyl (or disc). Among them: "The Gunner's Dream," "Paranoid Eyes," "Southampton Dock," and the title track, a musical nod to the Wall's "Comfortably Numb," which might be the only outward Pink Floyd love song in their entire catalog:

"And if I show you my dark side,
Will you still hold me tonight?
And if I open my heart to you, and show you my weak side
What would you do?"

When I saw Waters play MTS Centre last year - one of the best live shows I've seen - I was happy that he found room in his setlist for "Fletcher Memorial Home" (his tribute to "overgrown infants" Reagan and Thatcher) and "Southampton Dock." I would've done just about anything to hear that great piano segue leading into "The Final Cut." Maybe next time.

For those who prefer their Pink Floyd on the heavy side, there's "the Hero's Return," in which David Gilmour's raging guitar mimics a fighter jet crossing the sky, and "Not Now John" a rare Pink Floyd rave-up sung by Gilmour with supporting vocals by Waters and unnamed female background singers; hated by many, loved by me, it was the album's only single.

Recent pressings of the Final Cut include "When the Tigers Broke Free," which Pink Floyd recorded for the film version of the Wall. While I do miss the ticking clock at the end of "One of the Few" being interrupted by the gut punch at the beginning of "The Hero's Return," "Tigers" is a great bonus, a moving song about a soldier's sacrifice and the son he left behind:

"It was dark all around
There was frost on the ground
When the tigers broke free
And no one survived from the Royal Fusiliers Company C
They were all left behind
Most of them dead, the rest of them dying
And that's how the high command took my daddy from me"

Coming out the same year (and almost the same time) as U2's War, the two CDs make great companion pieces, Pink Floyd's being the introspective counterpoint to U2's more bombastic effort. You could do worse than to play them in a row on Remembrance Day.

Posted by Kenton Larsen at 9:41 AM