Can the iPad replace the laptop? The one-week iPad test!

Stephen Colbert has one. Letterman has one. I've got one too!

But should you get an iPad?

I've been using the iPad for the last week - downloadin' apps and figurin' out how the thing works, mostly - and I reckon that I really do love it.

But do I love it intrinsically, or do I just love the fact that I love it? Forgive me for getting all meta on you: it's what happens after staring at a backlit screen for seven days straight without food or water.

Regardless of what I think of the iPad, if it is to have any staying power, it has to convince casual and heavy laptop users that there's a better way to do what they're already doing: word processing, presentations, Web surfing, blog posting, tweeting, emailing, and all the other day-to-day stuff.

Creative Communications - the program in which I teach - is earmarked for "going laptop" in 2011 - meaning that every student entering the program next year will be required to bring a laptop computer with them to school, as long as it conforms to the college, department, and IT specs.

The million-dollar question: is an iPad a laptop?

Probably not by CreComm's current definition, because it's unlikely that the iPad will have the memory to edit full-length video, like our media production instructors like their students to be able to do.

Still, the iPad is a pretty incredible way to view video. And life is full of compromises, right? Right!

For instance, we'll be asking our first-year students to buy a 32 GB iPod Touch this coming September (unless they already have an iPod Touch or iPhone), primarily so they can familiarize themselves with the app landscape (appscape?), which is clearly here to stay.

I submit for your consideration: isn't the iPad a pretty good compromise between a laptop and an iPod Touch?

That's what I aim to find out!

Next Monday to Friday, I will be using the iPad, and the iPad only, for everything I normally use my laptop to do, which is: blogging, tweeting, creating presentations, writing and editing Word documents, listening to music, and emailing.

Apart from the iPad itself, I will be using these weapons in my arsenal: 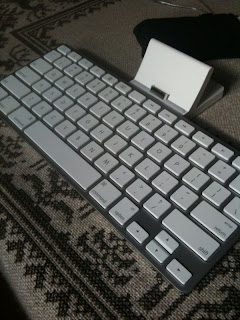 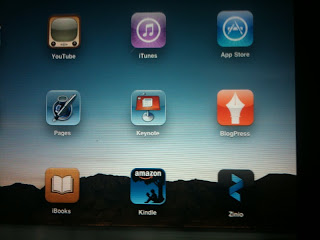 I'll take the middle row for writing, presentations, and blogging. 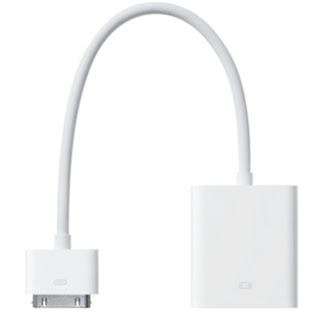 To show off my handiwork on a digital projector.
4. The iPhone 3GS

True, the iPad has made the iPhone seem a bit "yesterday," but you still need to be able to shoot pictures and video to post with your blog posts, right? Right!

The iPad has no camera, though it stores pictures very nicely, so using a separate camera (or phone) is really the only way to make your blog posts look loverly. Which I will continue to aim to do.

Before Monday, I'll be bringing myself up to speed on all of the most-important iPad apps, and running a few tests, so I know what's what, which is to say: if a bunch of weird crap suddenly appears on this blog, it's not me, it's the iPad.

If suddenly this blog seems more interesting and entertaining: it's not the iPad, it's me.

See you on the other side!
Posted by Kenton Larsen at 9:29 AM