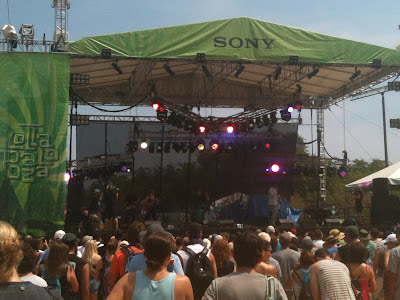 Out here in the fields. I fight for my meals. I get my back into my...hey, stop shoving!

It's official: I'm too old for Lollapalooza.

Lolla 2012 marked the fifth time I've attended Perry Farrell's music fest - the fourth time in Chicago, where it remains until at least 2018. I've said it before, and I'll say it again: it will likely be my last one, unless Kate Bush (last tour: 1979) decides to play there with a reunited XTC (last tour: 1982).

My reports from festivals past:

Like Lolla 2010, this year's fest brought out the grouchy grandpa in me. It was hot, oversold at 300,000 people, and filthier than ever (don't believe the eco-friendly hype). And that was before the typhoon moved in on Saturday, temporarily suspending the festival and leaving it smelling like one, giant outhouse.

The fest wasn't without its thrills. The best band of the festival, Florence + the Machine, was dynamite. I have the band's first album, but that didn't prepare me for the performance, which was funny, engaging, upbeat, and riveting. Should the band one day visit Winnipeg, I'll be first in line to buy tickets.

I also credit the festival for introducing me to my new, favorite band, Chicago's JC Brooks and the Uptown Sound. Purveyors of funky and retro R and B, and featuring one charismatic lead singer, the band was full of delights and surprises, like this awesome cover of Wilco's "I am Trying to Break Your Heart:"

Sadly, two great bands does not a festival make. At the top of my list of disappointments is one of my favorite bands on record, Iceland's Sigur Rós. The band played a set so mellow, its members might have very well evaporated from the stage before it was all over. Maybe they did: by then I was lulled into a heat- and music-induced trance.

The festival's rock bottom had to be the Black Sabbath reunion (its only performance in North America). Anyone who says it was great (Rolling Stone?!) is either on heavy drugs or a corporate shill. The only way to describe it is "sad."

The band opened its show with a seven-minute video of its greatest hits, which ultimately only served to be a depressing comparison between then and now. Within moments of the band taking the stage, you had to wonder if the show should have been called off on compassionate grounds. Ozzy Osbourne looked sick, thin, and sweaty, and he huffed and puffed his way though the songs.

The rest of my beefs:

Anyone over 15 who wears a wristband is, in the parlance of Iron Maiden's Bruce Dickinson, a wanker. I joined the wanker ranks with my Lolla three-day wristband, which can't be removed for the duration of the fest no matter how damp, smelly, and diseased it becomes.

Each year, Lollapalooza increases its possible attendance by ostensibly creating more space. Technically speaking, this is true. However, the areas around the stages are always exactly the same size. This means that every year more people are being crammed into the same-sized concert space. For the first time in my Lolla-going history, the crowd felt like a dangerous place to be. The band playing at the time: M83.

There's lots of it. It's all over the place. It's gross. It smells. The Lolla brochure: "Explore the green scene at Lollapalooza!" If you're looking for it, it's under the garbage.

It was 38 to 40 degrees each day. The line-ups at the free water stations are longer than the line-ups at the autograph tents. A glass of lemonade costs $8. Each person is allowed to bring in but one bottle of water. I'm thirsty just thinking about it.

It's hard to see bands at outdoor festivals at the best of times, but why are the Lolla stages big, enclosed boxes? The video screens also look like 90s technology (especially after recently seeing the Roger Waters tour) and are almost invisible in daylight. An upgrade is long overdue.

These things aside, Lollapalooza 2012 was totally awesome. Especially the part where I left the festival for the last time, cut off my wristband, and headed off to Portillo's for a hotdog and ice-cold beer - always a guaranteed way to calm Grandpa Larsen's ire.
Posted by Kenton Larsen at 5:38 PM