How to get a Winnipeg tree removed in 700 easy steps 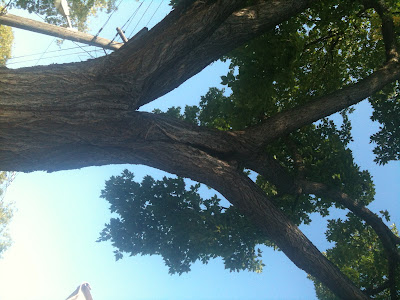 "I think that I shall never see/ a poem ugly as a tree (services company)." - Joyce Kilmer.

A lovely, old elm tree in my backyard took a beating in the big typhoon that recently blew through Winnipeg. But little did I know that it was not the answer blowin' in the wind, but a question: where can I find a reputable tree services company in this town?

Day one: save the elm!

"Oh no, there's a huge crack in the tree!" I said to my friend, the squirrel. With love for my tree on the brain, I called my friends at company #1 - the company that bands my trees.

Its workers showed up promptly and promised to try to save the tree. Later that day, they called and said, "No, the tree is cracked in two places and has to go."

The other issue: the tree threatens my house on one side and hydro wires on the other, so an unplanned fall wouldn't be good either way.

About to go away on vacation, I accepted the diagnosis, we made a deal and with a heavy heart, I headed out knowing that when I came back, the tree would be gone. Sniff, sniff.

Cue my cell phone ringing on vacation day five. It was company #1!

"Hi. A guy got injured when he removed a tree. Not yours. Huh-huh, huh-huh. And now I'm going on vacation for two weeks."

Like the student with the double-barreled excuse ("it rained and I had a toothache"), it had the ring of "I never really intended to do this job anyway."

After bidding the company a cold goodbye, I gave my dad and his partner a call and they called company #2 to provide a quote in my absence.

I can't complain about the speedy attention and expertise of company #2's representative, but the quote came in high, and the company wouldn't be able to handle the job for a week. I figured I'd get another quote when I got home, since it's always best to have three quotes.

So, I called company #3. The rep agreed that the tree has to go, provided a quote that fell somewhere between the first two, spoke fondly of "a relationship with Manitoba Hydro," and promised to get on the tree "this Wednesday" and, barring that, removing the really, really cracked limb in advance. Deal!

Somehow by the end of the very week he was to start the job, that promise became, "I'm not allowed to touch the tree without Manitoba Hydro. It's their delay."

The tree whisperer's earlier promises all but forgotten (by him), I called Manitoba Hydro. The representative told me that "a crew was out earlier today, but I can't see their report, because they've gone home for the day."

Meanwhile the tree had started to really crack and looked like it would soon come down on the house. So, I called back the tree whisperer. He wasn't happy, but he came out and tied up the tree, ostensibly so it won't fall on the house when it inevitably snaps. If the tree and I were fit to be tied when he arrived, perhaps we both felt a little more confident when he left. 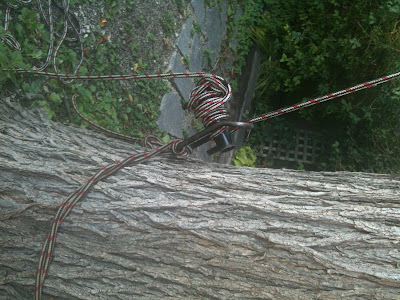 That was the last time I heard from the guy, begging the question: if a tree falls in your backyard, and there's no tree services company around to hear it, does it make a sound?