A wacky and terrible game of "Would you rather?" on Winnipeg Transit 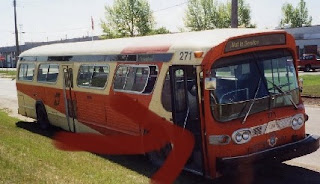 Stairway to Hell.
The more you drive, the less you take the bus, and the fewer great stories you have to tell.

I give you my favorite scene from Repo Man (the payoff is at 2:23):

I take the bus most every day, which means I have a backlog of 10,000 stories - one, great long-winded story for every bar in town. Totally worth the $3 bus fare.

The best and worst story ever

My favorite story is about the greatest - and worst - thing I saw years ago on one of those classic Winnipeg Transit buses with three, steep stairs leading up to the fare box.

A woman at the top of the stairs dropped her bus ticket, so she bent down to pick it up. Behind her was a guy ascending the stairs while talking to someone behind him. He turned his face around as he took the next step, but it was too late - and the rest of us were treated to a display of full face-to-butt contact, like a horrifying twist on the old Reeses ads:

Which would you rather not?


"It wouldn't be so bad either way if you wanted to do it, but if you were forced to do it - either one would be terrible."

Truer words were never spoken. Thank you, friend, for the philosophy, and thank you, Winnipeg Transit, for the memories.
Posted by Kenton Larsen at 10:15 AM