Scenes from a mall: the great underwear incident 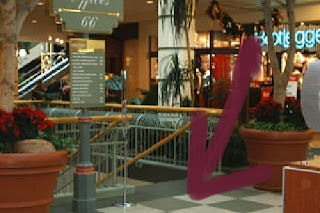 As I walked with my friend through Polo Park mall on our way to see a movie, a pair of old, balled-up underwear fell out of his pant leg and landed on his foot.

He kicked the gitch off his foot, and it landed a few feet away in a depressing pile of shame.

We continued walking to the movie theatre in silence, leaving the sad and abandoned briefs behind us.

After the movie, on our way back through the mall, we returned to the scene of the crime. There, we saw a janitor sweeping up my friend's disavowed underwear into a dustpan.

The janitor had a beleaguered look on his face; had there been a camera, I'm pretty sure he would have shrugged, looked directly into the lens, and sighed: "It's a living."

"Are you sure you don't want to go get your gitch?" I asked my friend.

And we never talked about it again.
Posted by Kenton Larsen at 11:08 PM