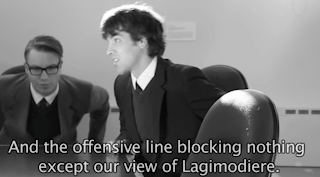 Palmer Fritschy (left) and some actor with a speaking role.
Extras, extras, read all about it!

I just watched a rough cut of Winnipeg filmmaker Sean Garrity's new short, Teeth, and was delighted to see a number of CreComm students in extra and supporting roles - most visibly, first-year student Palmer Fritschy.

Teeth will be released later this year - watch for it at a theatre with a short-film festival (like Cinematheque) near you!
Posted by Kenton Larsen at 4:40 PM