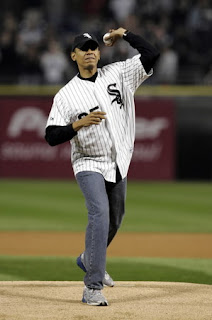 Photo from the Chicago Tribune.
Swing batta batta batta batta!
One of the great things about going to Chicago last year was that it was fresh on the heels of Barack Obama becoming the first African American president of the U.S.

The guy's picture was everywhere, like he was famous or something. Go figure!

As a result, I gave our students a blogging assignment to visit at least three of the following Chicago destinations related to Barack Obama, which I compiled from a wide variety of sources - though I think most of the heavy lifting was from the Chicago Tribune and New York Times.

A shout out to these sources - and the forgotten ones!

I'm not going to give the same assignment this year, but it might make a fun afternoon out for someone looking for something presidential to do on their travels:

Trinity United Church of Christ
400 W. 95th St.
The church the Obamas left because of controversial remarks by the Rev. Jeremiah Wright.

Valois
1518 E 53rd St
Chicago, IL 60615
Where Obama ate before heading to D.C. for his Senate job. The cafeteria-style restaurant does breakfasts and, on Thursdays and Sundays, chicken pot pie.

University of Chicago Law School
1111 E 60th St
Chicago, IL 60637
Obama taught here from 1993 to 2003. Designed by Eero Saarinen, the man who gave us the St. Louis Gateway Arch, it was another favorite of students who visited last year.

Sidley & Austin
Chase Tower
10 S Dearborn St
Chicago, IL 60603
Where Barack and Michelle met in 1989 while he was a summer associate. She was an associate mentor.

Topolobampo
445 N Clark St
Chicago, IL 60610
A favorite dinner spot. Barack and Michelle are regulars, at one of the booths lining the restaurant's south side. They apparently order the guacamole and sopa Azteca.

MacArthur's Restaurant
5412 W Madison St
Chicago, IL 60644
If it's on the menu that day, order Obama's turkey legs and dressing.