Chicago, Hudson Bay...what are they? 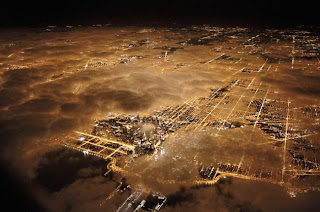 Chicago...whatever that was. Courtesy of Newsweek.
Hudson Bay? That's where we buy our Olympic mitts, right?

Newsweek has a pretty great photo feature online and in print called, 100 places to remember before they disappear.

Among the magazine's places that "could disappear or be radically changed if climatologists are right in their predictions of global warming:"

On the plus side, we're safe as kittens here in Winnipeg. Nips on the 'House!
Posted by Kenton Larsen at 8:38 AM