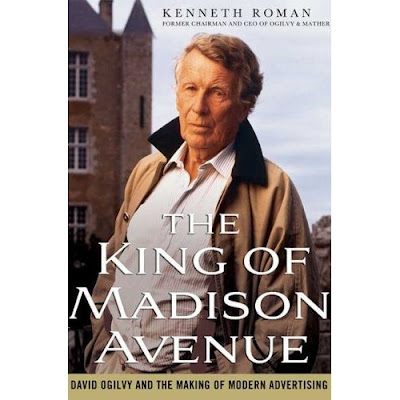 Ron Robinson (who can do no wrong in my book after hosting CBC's groundbreaking Nightlines radio show) has a well-written review of a new book about David Ogilvy in the Winnipeg Free Press.

The book, "The King of Madison Avenue: David Ogilvy and the Making of Modern Advertising," is written by Kenneth Roman and available through Amazon here.

Ogilvy, of course, is the British advertising guru who espoused rigid rules about how copywriters should write ads. Though many of his rules are debatable ("Don't be a clown!"), there's a reason why people are still talking about him some 50 years after he did his best work.

Ogilvy wrote some classic ads, including Rolls-Royce's print ad with this very long, but effective, headline: "At 60 Miles an Hour, the Loudest Noise in This New Rolls-Royce Comes from the Electric Clock."

Robinson's review is noteworthy for bringing in some local connections to Ogilvy, including this one, which I haven't heard before:

"(Ogilvy's) new boss was the former Winnipegger, William Stephenson, aka Intrepid. Ogilvy rarely spoke of his work, honouring the Official Secrets Act, but Stephenson said of him, "literary skill, very keen analytical powers, initiative and special aptitude for handling problems of extreme delicacy ... David not only made a good intelligence officer, but he was a brilliant one."

Sounds like a great summer read. While you're at it, make sure you read Ogilvy's classic books, On Advertising, and Confessions of an Advertising Man, if you haven't already. Then remind yourself, "Rules are made to be broken."
Posted by Kenton Larsen at 3:57 PM