Hey, Brainiac: how do you mark advertising creative? 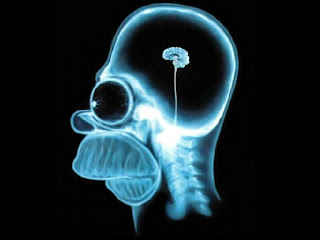 One of the first things we do every year in the advertising major is a "right brain or left brain" dominance test like this one.

The lessons in advertising:

1. The reason you're not creative is because you've got the wrong brain-hemisphere dominance;

2. The reason you're not organized is because you've got the wrong brain-hemisphere dominance.

How do you mark creative?

For ad instructors, however, the test raises this ugly spectre: what if you judge a student's creative work using your brain dominance, when that student has a different dominance than you? Could it be that the work is much better than you think, but you don't have the brain orientation to know it?

As every good instructor knows, "human error" plays a part in any evaluation. Why is this paper better than this other one? "Because I think so and have experience in the area," is usually the answer regardless of how many marking matrices you pull out of your arse. I mean, "hat."

It's about as honest an answer as you can give, but not very satisfying to the person hearing it - which explains all of those marking matrices, which are more designed to satisfy the student into believing that the marking was somehow "scientific." In fact, this is actually no more true than if you drop the papers from an airplane and give an A to the ones that land furthest from the school.

However, by understanding your brain dominance, and the brain dominance of your students, you may actually be able to negate at least some of the subjectivity that is part and parcel of any teacher's grading scheme.

Me and my left brain

Having done about a thousand of these brain-orientation tests, I know that I tend to favor the left brain by a fairly large margin. Intellectual, verbal, logical, planned, structured, and sequential are, in particular, my advertising and classroom favorites.

Nonetheless, most people have some brain orientation outside of their dominant hemisphere. Some of my non-dominant hallmarks: remembering faces better than names, asking open-ended questions, preferring “free” over “reserved,” interpreting body language, and using metaphors and analogies. Just like a snake eating its own tail; its own tail, I tell you!

These results mean that I think in a linear manner, and take pieces of information, line them up, make logic out of them, then draw conclusions; I think sequentially, not randomly (which is reflected in the fact that I write good. Har, har.); I can process symbols without the aid of something tangible (which isn't the case for everyone); and I favor logical, verbal, and reality-based processing.

Having figured this out, what's an instructor to do?

The learning and thinking process is enhanced when both sides of the brain participate in a balanced manner. The first step, for everyone, is to be aware of your less-dominant style, so that you can improve on it and be aware of your biases.

In my case, I can:
It's a truism in advertising that the best, most creative work might first strike you as "bad." It's only upon reflection that the brain sometimes makes that "a-ha!" connection and realizes genius for what it is, which is why the Beatles' Revolver is now widely considered to be the band's best album after everyone pretty much agreed for 30 years that it was Sgt. Pepper's Lonely Hearts Club Band.

It's also a damn good excuse for putting off marking and handing back papers long after students don't remember them. Barkeep: one more Margarita! Ah, I'm feeling more creative already.
Posted by Kenton Larsen at 9:51 PM