Is a Happy-Go-Lucky worldview the best education? 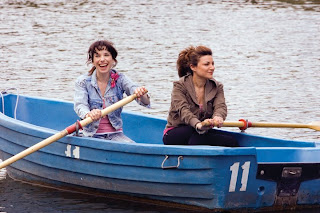 Sally Hawkins (left) stars in Happy-Go-Lucky.
It's been so long, I'd forgotten that a film could be so powerful as to make you question your very outlook on life. That's what happens when the last three movies you rented were Zack and Miri, Transformers, and Step Brothers, I guess.

However, this weekend I had the good fortune to stumble across Mike Leigh's recent film, Happy-Go-Lucky, thereby absolving my previous movie-rental sins (I hope).

Frankly, this movie stunned me. Ostensibly a character study of a young school teacher, Poppy (played by Sally Hawkins), it's really about having a worldview, the role we play in our own - and each other's - lives, and how education helps us cultivate, embrace, or reject that view.

If it sounds dull, that's my fault, not the film's. Besides exploring the broad themes I've mentioned, it also happens to be really charming and funny.

Hawkins is a revelation in the role: it's a crime that she wasn't nominated for Best Actress at this year's Oscars. As Poppy, she's a compulsive comedian and observer of life, dressed in bright colors and high boots with big heels; she's never met a sexual innuendo she doesn't like, and can't sit still or stop giggling for a second. Yet, she's no clown: she's a fully formed person who's self-knowing and clever.

I've met people like Poppy in real life, and you have too. Whether you embrace her playful goofiness probably depends on your own, personal worldview; The odds are with her: according to Rotten Tomatoes, even sullen and jaded movie critics have given the film a 93 per cent approval rating, the old softies.

As with all of Mike Leigh's films, most notably Secrets and Lies, the actors have workshopped their characters over the course of many months and improvised their scenes on camera, which gives the film a very real, lived-in quality. I so bought Hawkins' portrayal of Poppy, I was disappointed to find out in the DVD features that the actress isn't exactly like her in real life.

The film's action kicks off when Poppy's bicycle is stolen - is it just me that sees this as a nod to Pee-wee's Big Adventure? - leading her to pursue driving instruction from her polar opposite, Scott (Eddie Marsan), a racist, paranoid, repressed jerk who - the film hints - may have once been a victim of his own "education" at the hands of bullies in the schoolyard.

As a grade-school teacher, Poppy is as great as the driving instructor is bad. She clearly loves what she does, and makes the lessons come alive for her students - at one point dressed in a homemade chicken costume. Later, she shows her serious side when she has an intervention with a student who she sees hitting other kids in the playground.

We wonder: might the driving instructor have turned out differently if he'd had Poppy as his teacher?

In some of the film's best scenes, Poppy takes flamenco lessons from an emotional Spanish dance instructor (Karina Fernandez), who openly weeps about the man who left her at the same time she teaches the class about empowerment. "My space!" yell the students. Is this dancing or self defense? Yet later in the film, we see where perhaps this lesson helps Poppy too.

The movie leaves Poppy's positive worldview an open question. We see that her two sisters aren't much like her: one's sarcastic and grouchy, and the other has browbeaten her husband into submission. Might it have been an intervening teacher who made Poppy the person she is?

Ultimately, the film works as a slice of life, comedy, and cautionary tale - but most of all, it makes you want to try to be just a little bit more like Poppy. I'm feeling happier already.
Posted by Kenton Larsen at 3:57 PM