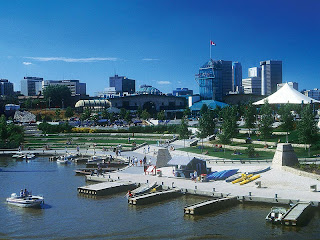 Hey, it is nice here. Barkeep, I'll have a cordial.
We Believe in Winnipeg! And if you don't, you can move, traitor!

The Winnipeg Free Press and Winnipeg Chamber of Commerce are the latest to put together a lame ad campaign reminding us why we should love our city. The big idea: "We believe in Winnipeg!"

The exclamation mark is my own.

As the Free Press helpfully points out, this follows other successful campaigns; who can forget "Love me, Love my Winnipeg," "100 Reasons to Love Winnipeg," and "Nowhere - Like Winnipeg?" You've got to admit that the last one is pretty great.

And who can forget "Spirited Energy," the ad campaign for Manitoba that made us all join hands and sing, "Kum Bye Ah?"

I used to work with the guy who is often credited with "masterminding" the Spirited Energy themeline - a Winnipegger who (wait for it) doesn't live here. Hell, he didn't live here when I worked with him - in Winnipeg!

However, this guy did know how to market himself and make a good marketing dollar while he did it, so good for him for doing it with the most focus-grouped-to-death slogan to ever come down the pike, except for maybe "I'm Lovin' it."

I really, honestly do love Winnipeg, but it's stuff like this that makes me, as my favorite comedian Derek Edward says, want to pull over to the side of the road and stick my head through the windshield.

Taking the Winnipeg show on the road

First: it's true that we Winnipeggers knock our city too much - and that our 'tude doesn't play in other places like it does here. I remember telling a self-deprecating joke at my job in New York, and a co-worker responding, "Why don't you like yourself?"

"Because I'm a self-deprecating, sarcastic jerk, like everyone else back in my home city," I should have responded. Instead, I said something like, "Huh? I like myself." And slinked off into the shadows to lick my wounds - thank God they tasted like Slurpees.

I also recall vacationing in Halifax a couple of years ago, and having the time of my life - only to read the headline on the Gazette one morning: "Why would anyone vacation in Halifax?" No wonder I felt at home.

And, by the way, it is true that - even though we share the same sense of humor and values as our brethren on the East Coast - Winnipeggers can't name the capital of New Brunswick, and East Coasters don't know whether Winnipeg and Manitoba are provinces, cities, countries, or planets. You heard it here first!

Capital of New Brunswick: it's Moncton, right? Right? Right? I'm just too lazy to Google, is the problem.

No, the main problem with all of our Winnipeg advertising themelines is that they come from a place of inferiority and they're just bland enough to offend and inspire no one. They just sit there long enough to be made fun of, then slink into the shadows to lick their Slurpee-seeping wounds.

As an advertising copywriter, instructor, and a proud Winnipegger, I know what happens next: someone has to say, "If you're so smart, then come up with your own themeline, hater."

OK, I admit it: it's not an easy task. I've had my students do it in the past, but it always seems to go in the direction of "Keepin' it Riel," which I would like, were it not for the t-shirts everywhere that say, "Keepin' it Riel."

The other thing that happens is that people can't resist the urge to go "negative" on a themeline:
And so on...

Is the best themeline for Winnipeg a parody? Read on...

So, having given this much thought, it occurred to me that the best themeline for Winnipeg would need to have the following traits:

1. It would need to be positive - no hidden negativity;

2. It would have to come from a feeling of superiority, for a change;

3. It should immediately capture the public's imagination - no focus groups;

5. It should be written by a Winnipegger who lives in Winnipeg - as Dick Cheney once said, "No foreigners allowed;"

6. It should have some intrinsic news value.

Given this creative brief, I hereby nominate the following themeline, which - yes - is a parody of the Las Vegas themeline, but also says something about all the good stuff we produce in Winnipeg - like, um, comedians.

I also like this themeline because it throws it back in Vegas' face and, admit it, you know that Vegas has been asking for it:

"What happens in Winnipeg...goes everywhere."

Now, I think I'll have a cordial while I solve the U.S. economic crisis. Blog to follow.
Posted by Kenton Larsen at 6:52 PM