Would an iPhone by any other name be even sweeter? 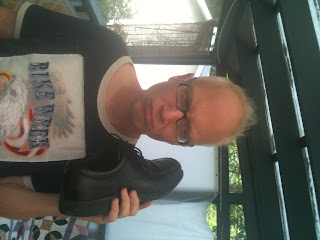 I get this line a lot:


"Hey, Larsen, you said you hated cell phones, but now you're the guy who loves his phone!"

To this I respond:

1. Nobody told me that a "cell phone" was mobile Internet until I actually got an early iPhone and discovered it myself.

2. I rarely use my "phone" to make phone calls. Doesn't that make it something else?

3. The thing I hate about "cell phones" is boneheads talking on them loudly in restaurants, on the bus, at movies, or anywhere else other people go for quiet, downtime, or conversation. The ability to text and email essentially removes the loud-talker issue (though don't get me started on the iPhone glow at the movies).

My personal beefs aside, I've been wondering when we'll come up with a better and more suitable name for "smartphone," "mobile phone," and/or "iPhone."

Wouldn't Apple stand to sell more iPhones if the last, few people on Earth who don't have one got the message that this thing isn't for phone calls? I mean, yeah, it's for phone calls - but that's the least of it.

Last week, Jeff Jarvis asked the same question on his blog: "It's not a mobile phone. So what is it?"

Jarvis doesn't like "mobile" (because we mostly use these devices at home). However, he does say that he likes "iHändy" which is a variation of what they call their portable devices in Germany.

I dunno. Looks a little Mötley Crüe to me.

I have another suggestion.

This week, a friend told me that he was sitting with his young daughter by a kids' pool. She was having a good time throwing stuff into the water and my friend didn't notice until too late that one of the objects that made its way to the bottom was - you guessed it - his iPhone.

He pulled the device from its watery grave, feeling the panic of a person who has become accustomed to using a mobile phone to do absolutely everything. (But, sure enough, a couple of days sitting in rice was all it needed to start working again.)

That's the third or fourth story I've heard this week about people having panic attacks when they think their phone is dead or lost. On his podcast this week, Joe Rogan said that he was pulled over by a cop on suspicion of drunk driving after he swerved his car in a blind "where's my phone?" panic.

Inspired by that insight, I put forward my entry to the mobile phone renaming sweepstakes:

Apple could just add an "i" to the front of the word, and they'd be good to go.

Then again, the New York Times suggests our phones are more tracking devices than anything, so we could also go with:

Ahh, a job well done. Unless, of course, you have better ideas. Do tell.
Posted by Kenton Larsen at 8:05 PM