Encyclopedia Brown made me Dictionary Larsen 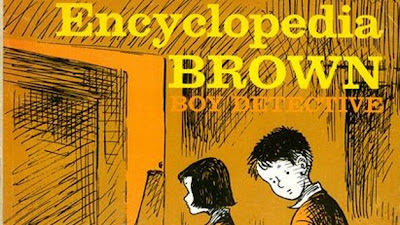 I've always believed that one of the best predictors of a student's success is "books at home."

And research backs it up. More cash! Higher education! Break the ice at parties!

For me, the books that really made me the rich, entertaining Brainiac that I am are The Great Brain, anything by Judy Blume, and - maybe more than any of them - Encyclopedia Brown.

So, it's sad that we learned yesterday of the death of Donald J. Sobol, the creator and writer of Encyclopedia Brown, a series of 20+ books that launched in 1963.

Sobol's talent was writing, as the Globe and Mail says, books for "kids who hated to read." I don't know that I ever hated reading, but there's no doubt that Encyclopedia Brown was the literary equivalent of "I'll eat just one more potato chip." Just one more mystery before bedtime!

In the stories, Encyclopedia Brown is a boy detective for hire, a bargain at "25 cents per day, plus expenses," who also helps his police-chief dad solve mysteries too complicated for the police force. Assisted by the plucky Sally Kimball and plagued by arch nemesis Bugs Meany, Encyclopedia's solves mysteries with a keen eye for detail and ability to uncover factual errors in his suspects' stories.

The best part: you could solve the mysteries yourself. You flipped to the back of the book to get the solution, and generations of young kids (present company excluded) learned the thrill of reading the solutions before the mysteries in order to feel a little bit smarter (the equivalent of watching Jeopardy! earlier in the day to impress people with your "knowledge" later on).

However, one of my proudest moments is figuring out the Case of the Flower Can all by myself. There are two kinds of cans: flour and flower.

Where do I collect my quarter plus expenses?

Email ThisBlogThis!Share to TwitterShare to FacebookShare to Pinterest
Labels: books