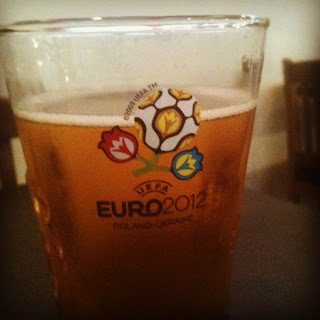 The thrill of victory and drinking beer at noon.

I watch soccer for two reasons:

1. I appreciate an excuse to drink beer at noon.
2. The scintillating play-by-play commentary.

No, I'm not drunk. I've written before about the Brits saving soccer at the last World Cup, if not with their game play then with their often hilarious commentary. Same goes for Euro 2012.

I now watch soccer with pint of Carlsberg in one hand and a pen and notepad in the other, the better to make note of a particularly deft touch with a word.


"If you can lip read as well as me, you can tell the German coach is not impressed."

"Seventy eight years is even longer than what I've been around - just."

"Not exactly thrilled to the core."

"We will not tire of seeing the quality of that strike."

"It's all rather sporting at the end."

"Hardly a hair out of place."

"There's a German in the way."

"Dagger through the heart."

"A lesson in the artistry of passing a football."

"Spain has its party tricks, but French are the party poopers."

"It's a delicious contest so far."

Enjoy the delicious final, and happy Canada Day!
Posted by Kenton Larsen at 11:38 AM