Just For Laughs is just for losers - like me! 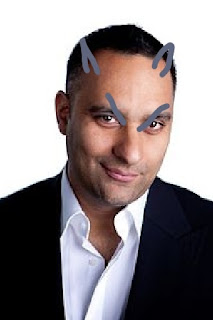 Whenever the Just For Laughs Festival gets closer, I feel a great disturbance in the Force, as if a million voices laughed out and were suddenly silenced.

If the Winnipeg Fringe Festival is "the uncle who paid my way through school but molested me," the Just For Laughs Festival is the same uncle without the cash.

I've been in the Just For Laughs homegrown showcase a few times. It was (and still is?) a regional competition for stand-up comics to outfunny each other in the hopes of winning the chance to perform at the Montreal festival and become "Canadian famous," also known as "one step away from the witness relocation program."

Glen Foster had a joke about performing at a Just For Laughs showcase. He'd say something like, "There was a hyper comic, a weird comic, and a comic who did impressions - and I was the funny comic." Ba-boom!

His point, I think, is that Just For Laughs is more about high concept than about "being funny" per se, and I think everyone in the competition knows the score: you might win, but not if there's a one-armed unicyclist who can tell jokes with his hair on fire.

The year I had my best showing, the competition was hosted by Shaun Majumder, a very nice guy and an attitude adjustment over the previous year's Harland Williams, a very funny guy onstage who showed up backstage looking like maybe he'd lost a bet with a bonhomme.

I was up third - a sweet spot! - had a better-than-average show, hugged Mr. Majumder for luck on my way offstage, and watched the other comics go up one by one. They were good, and there was no high concept to be found among them.

When it was all over, I felt pretty good about my chances, but knew enough not to get my hopes up. But as we waited for the results, the now-most-famous-comic-in-the-world-who-wasn't-famous-then Russell Peters slid over and whispered in my ear:

I immediately started planning my trip to Montreal. "How many baguettes should I take with me?"

About 10 minutes later, the judges appeared onstage to announce the winner. I prepared myself to get my birthright, and the announcer mispronounced my name so badly, it sounded like another guy completely. Because it was another guy.

That dude bounced up to the stage, got his laurel and hardy handshake, and Russell Peters slid over again and whispered:


"The judges decided to give it to the guy from Saskatchewan."

If there's a lesson to be learned from this experience, I think it's this: never trust Just For Laughs, Russell Peters, or Saskatchewan. So there!