Help me tear down the Wall and one man's dreams

With Roger Waters playing the Wall at MTS Centre twice this week, I'm taken back to a simpler time in which I pirated the double album on then-state-of-the-art technology: cassette tapes.

Dubbing cassettes was a boring business, so I'd make it more interesting by plugging a mic into the stereo and talking over the music: an earlier precursor to "the director's commentary" on DVDs.

When I dubbed the cassette for my pal, Jason Beck, I turned on the mic right after the intro to "Vera," in which Roger Waters asks the musical question, "Does anybody here remember Vera Lynn?"

At the time, Beck had a stuffed penguin named "Pengi" (maybe he still does: see the creepy photo, below), so I said "Death to Pengi!" into the mic, ruining the song for him forever. 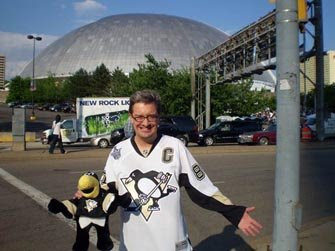 I think Pengi would've wanted it that way.
Posted by Kenton Larsen at 3:59 PM