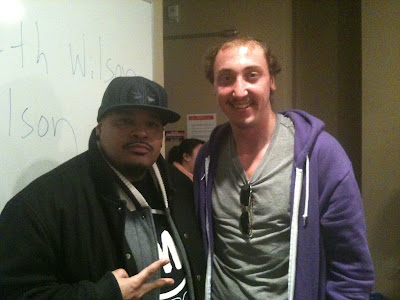 An emcee should never open for an MC.

While it was a delight to see husband and wife Fresh IE (Rob Wilson) and Sheila North Wilson at Red River College a couple of weeks ago, it brought back the time I opened for Fresh IE at the Manitoba Theatre for Young People. Shudder.

If you think that the audience for a Grammy-nominated rapper would be happy to see a white, aged comedian with ironic glasses and an non-ironic receding hairline tell Scooby-Doo jokes, then you're thinking exactly like me when I accepted the gig.

I've blurred out most of what happened at the big event, but I recall looking out into the audience and thinking, "Boy, Fresh IE sure has lots of young, female fans." So I started mentally cutting jokes until all I had was the handful that I'd written especially for the occasion.

I'd forgotten what the jokes were, until I found this scrap of paper in a drawer the other day: 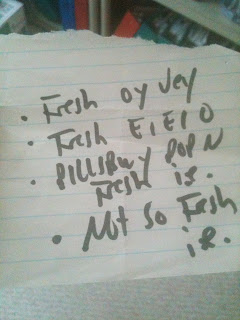 The jokes:
Thank you. Good night!
Posted by Kenton Larsen at 7:52 AM