The Greatest Story Ever Told (on a test)

We've all had to write tests in which every question looks like Latin.

Forced into a corner by our own poor knowledge and/or test preparation, we must fight back using only our wits, which is to say: "ability to bullshit."

For me, it happened on the eighth-grade religion test. I recall concocting an answer involving some key concepts: Jesus, disciples, fish, water, boats, and a miracle. I also recall the teacher's comment on the marked paper: "Very creative!" God bless the optimists.

For this poor person, it's "the economine," a complicated concept that only gets more complicated with the introduction of someone named "Abroce Obamo." Ba-boom!

With the disclaimer that this isn't or wasn't one of my students, let's enjoy:


"I think that the economine going so badly for the past month or so is very effective to the consumer because costs have gone up, the cost of living has gone up. And people are getting laid off of their jobs, so they cannot support their families, because of the economine.

"More and more people file of barrupcise and for close of their home. I saw on the new that she caries a bag with all of her stuff in it because she has no money and she is forsed on the street. And no one knows how to solve the problem of money. It's either people spend to much on things they don't need or they get fired from their jobs. The cost of gas does not help one bit either.

"More and more people are trying to get better jobs or try to get more hours at the job they are already at. As I think about food as gone up to, so the way of life is costing a pretty penny. That people have to work extra hard at so there is food on the table for their families to servie. 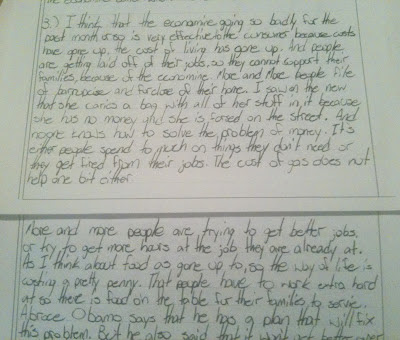 Not the Star Wars crawl, then.
Posted by Kenton Larsen at 8:06 AM