The Greatest Story Ever Told (in a community newspaper) 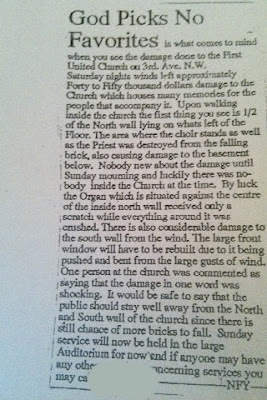 The humanity! And that's just the sentence structure.

This awesome article is from a Canadian community newspaper, which shall remain nameless. Paragraph breaks are mine. We can blame the writer for everything else:


"God Picks No Favorites is what comes to mind when you see the damage done to the First United Church on 3rd. Ave. N.W.

"Saturday nights winds left approximately Forty to Fifty thousand dollars damage to the Church which houses many memories for the people that accompany it.

"Upon walking inside the church the first thing you see is 1/2 of the North wall lying on whats left of the Floor. The area where the choir stands as well as the Priest was destroyed from the falling brick, also causing damage to the basement below.

"Nobody new about the damage until Sunday mourning and luckily there was no-body inside the Church at the time.

"By luck the Organ which is situated against the centre of the inside north wall received only a scratch while everything around it was crushed. There is also considerable damage to the south wall from the wind. The large front window will have to be rebuilt due to it being pushed and bent from the large gusts of wind.

"One person at the church was commented as saying that the damage in one word was shocking. It would be safe to say that the public should stay well away from the North and South wall of the church since there is still chance of more bricks to fall.

"Sunday service will now be held in the large Auditorium for now and if anyone may have any other questions concerning services you may call (number)."

Posted by Kenton Larsen at 3:51 PM