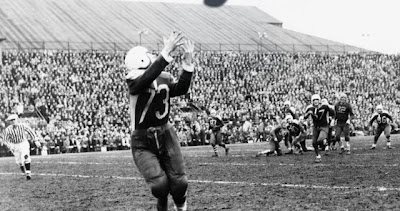 My uncle, Charlie Camilleri, passed away in Toronto on Dec. 23. He is remembered as a war veteran, a two-time Grey Cup winner with the Argos ('46 and '47), and an executive with CBS records.

To me, he was uncle Charlie of "my Toronto family," famous for mailing us a giant package of records at Christmastime, hanging out with Tony Bennett, Bruce Springsteen, and Pink Floyd, going to every sporting event in town, and - get this - having a backyard swimming pool.

I remember my uncle as the funny guy who had a quip and opinion for every occasion. He delivered my favorite on a road trip to Niagara Falls, as we passed Hamilton, ON: "It looks like Independence Day after the aliens hit."

His banter with his sons is legendary in my family:

Charlie (to my cousin Ron): You need to exercise more.
Ron: Dad, I played golf yesterday and carried my clubs for 18 holes.
Charlie: You should have carried the cart.

My cousins once made fun of my uncle's plaid shorts and said they would be too embarrassed to sit with him at a Blue Jays game. After delivering a barrage of insults back at them, he disappeared for a bit, and walked back into the room, ready for the game in a new pair of pants.

Obit from the Toronto Star:

On December 23, after a long illness, Charles passed away in his 88th year. He will be lovingly remembered by his wife Margaret, sons Rick and Ron, and grandson Spencer. Charles will be greatly missed by his nephews, niece and relatives as he reunites with his parents Joseph and Mary and brothers Michael and Vincent.

After serving in WWII, Charlie returned home and joined his beloved Toronto Argonauts where he found teammates for life. He was rewarded with two Grey Cup wins. He now reunites with some of his legendary teammates. He also played and won a Canadian softball championship with People’s Credit Jewellers giving him two pro sports championships in the same year.

After his athletics, he enjoyed a wonderful career with CBS Records where for decades he was loved by his fellow employees and artists alike. He retired from CBS to home life. He will be remembered for his enduring friendships and dedication to the people around him.

Charity also played an vital role in his life as he served for many years with the Variety Club of Canada, also being awarded the prestigious Heart Award. The family will be holding a private service and a celebration of Charlieʼs life in the new year. In lieu of flowers, please make a donation to the charity of your choice.
Posted by Kenton Larsen at 7:39 PM

Email ThisBlogThis!Share to TwitterShare to FacebookShare to Pinterest
Labels: family