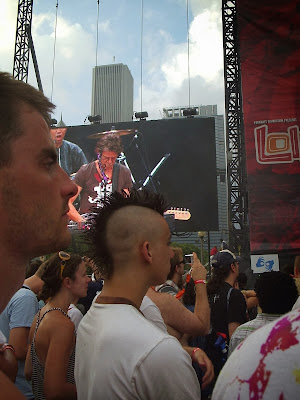 Grandpa Reed has something to say to the troubled teens at Lollapalooza, 2009.

I love Lou, I really do.

Man, it bummed me out when I heard that Lou Reed died. One of my favorite musicians, the man exuded invincibility: "tough, acerbic, authentic, and uncompromising," I said on this blog after I made the trek to see him perform live in Chicago at Lollapalooza 2009.

Like a lot of Lou Reed fans, I got into the man's music after hearing Walk on the Wild Side - quite possibly the best hit song to beat the censor ("But she never lost her head, even when she was giving head..."). His album, Transformer, remains the easiest way to get into Reed's music: catchy tunes, glossy production, and David Bowie on background vocals - what's not to love?

For a lot of people, Lou Reed begins and ends here. It's too bad, because his life's work holds up to closer scrutiny. I know, because I've been spending the past week playing through his entire catalogue - from his work with the Velvet Underground to the end of his more-challenging solo stuff - and all you can really do is look upon his works, ye mighty, and despair.

Like the Who, Lou Reed is best experienced as an album artist; trying to compile the key tunes into a one-volume greatest-hits package inevitably falls short. For instance: do you include the challenging Coney Island Baby or the poppy Charley's Girl (from the same album)? Do you include the almost 11-minute concerto Street Hassle or the happy-go-lucky Real Good Time Together (also from the same album)?

It's quite possible to create a compilation that positions Lou as a pop artist, rock and roller, gender-rights activist, rapper, hipster, comedian, or drug addict. Instead of doing any of these things, I took notes as I played through the albums, which include these 50 highlights and observations (links open in YouTube):

2. Avoid these albums at all costs
The Raven
Metal Machine Music
Lulu

4. Can't get it out of my head
How do You Think it Feels

5. Not as depressing an album as they say
Berlin

6. Best Lou singing vocal
Nobody But You

8. Best song from a terrible album
Who am I? (from the Raven)

10. Best stab at having a hit
Satellite of Love

11. Worst stab at having a hit
The Original Wrapper

13. Argument for anxiety
Waves of Fear
Paranoia in Key of E

17. Funniest song about addiction
The Power of Positive Drinking

23. S and M's greatest hits
Venus in Furs
The Gift
The Blue Mask

26. Corporate rock
Work
Don't Talk to me About Work
Future Farmers of America

27. Lou the gamer
My Red Joystick
Down at the Arcade
Video Violence

30. Love songs
I Love You
I'll Be Your Mirror
Satellite of Love

31. Shoulda been a single
I'm So Free

35. Formulaic Lou
I Remember You

36. New York landmark
"The Statue of Bigotry" in Dirty Blvd.

40. Let Moe Tucker sing
I'm Sticking With You
After Hours

44. Provocative questions
"How do you think it feels to only make love by proxy?"
"What goes on in your mind?"

45. The Velvet Underground had fun?!
Temptation Inside Your Heart

48. Music video
No Money Down

50. What's your favorite Lou tune or album?
Post it in the comments before or on Twitter @kentonlarsen
Posted by Kenton Larsen at 2:20 PM