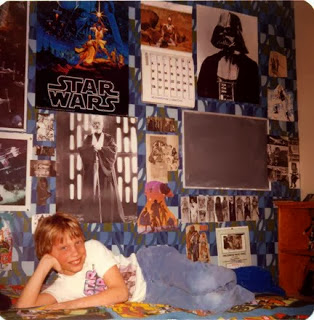 Star Wars is now and forever, especially if your name is Kenton Larsen and your room looked like this photo in 1977.

As I'm wont to point out, I like to defend my love of the Star Wars movies in terms that everyone can understand:


"Star Wars is like sex: even when it's bad, it's still pretty good."

It's good for a laugh, but it doesn't do much against the taunts of those who would question Star Wars' mettle against Star Trek (the long flight to nowhere), Lord of the Rings (the long walk to nowhere), and Harry Potter (the wand-wanking boy wizard to nowhere).

At some point, these tasteless buffoons will pull out their trump card and say, "If you're so smart, what about those terrible Star Wars prequels with Jar Jar Binks, fart jokes, and Manakin Skywalker?"

This is where most Star Wars fans respond with a well-timed "Doh!," "fuck you!," or "Mortal Combat!"

Fear not, Obi-Wan: there is another way to defend Star Wars, and director J. J. Abrams will help me make it so, Number One.

The upcoming trilogy will be dark and substantive, because there's no way it can be about anything other than dying and passing along the torch to another generation, who will fight your battles all over again.

If my viewpoint is correct (and it is), this means we'll be back to childhood by Episode X. Bring hither the fart jokes!