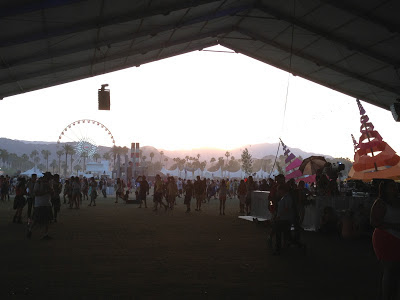 After years of complaining and threatening to leave Lollapalooza behind, this year I finally put my money where my mouth is and went to Coachella instead.

My beefs with Lolla are well documented in the above link, but it essentially comes down to too many people in an enclosed space and arseholes pushing and shoving their way to get as close to Mumford as they possibly can.

However, Lolla is in Chicago - I love Chicago and a bit of my heart broke thinking that I wouldn't see it this year. Coachella is in Palm Springs. I'd never been to Palm Springs, but anyplace that's good enough for Bob Hope and Dinah Shore can't be all bad, right?

So off I went with great music and great music conditions as my quest. My Coachella report:

Lest we forget, these festivals are all about the music. Basically, I just want to see some bands I love and/or have never seen before, and discover some I should love or have seen before. Easy!

You can't beef the Coachella line-up: a solid mix of bands from the present and days gone by. 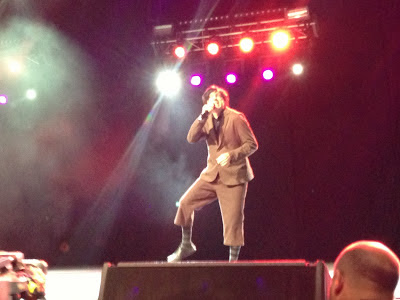 Lou Reed cancelled because of something about needing a new liver, but I'd seen him before at Lollapalooza and so many other bands made up for it.

Among my new discoveries are Japandroids, a great Canadian rock band that I didn't know was Canadian until they thanked all the Canadians, and Palma Violets - a kick-ass punky-pop band from England that I would gladly travel and pay to see again.

It was also awesome to see Lee Scratch Perry with a mirror on his crotch (so he could stop scratching?), the reunited Specials, and Paul McCartney's son, James, who is so humble, he makes his dad look like a fame-hungry bastard: dude just strummed his last song, walked away, turned around and managed a half-wave goodbye.

I also enjoyed Hot Chip (the best synth band in the world?), Yeah Yeah Yeahs (with the choir!), Franz Ferdinand (they've still got it!) and the Stone Roses, particularly Ian Brown's tambourine playing, which follows an interesting model: 1. Pick up two tambourines. 2. Hold both of your arms up in the air. 2. Keep them there forever.

The disappointments? Blur phoned it in, Rodriguez looked to be on death's door (he needed two people to walk him out, and didn't appear to be singing at times), and New Order - one of my all-time favorite bands who were actually upstaged by OMD and Sparks from the same era (more on that in a bit).

You leave Winnipeg and it's cold. You arrive in Palm Springs, and the airport has tents for a roof. Sweet.

3. The accommodations and shuttle buses

I bought my Coachella tickets as part of one of its travel packages, which included accommodations at the Westin Mission Hills Golf Resort and Spa and shuttle bus passes to the concert. The hotel was awesome, the pool was more awesome, and the shuttle buses showed up on time and got us there in less than an hour (and one of the drivers was reluctant to say he was from Canada, and ruled out Toronto, Montreal, or Vancouver. We a know a Winnipegger when we see one!).

All told, the whole vacation is about $1,200 a person - not bad at all, though you need at least two people to get the deal.

This deserves a special shout-out from number 5, because the public art at Coachella really is super-cool, except for that one, giant snail on wheels that kept showing up in front of stages and pushing people out of the way.

For instance, here's the Coachella Power Station: if you look closely, you can see hippos working feverishly to make it all happen. 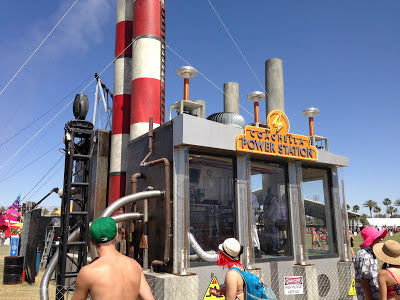 There's more where that comes from, and it's all pretty darn lovely and impressive.

Not as cramped or oversold as Lolla. However, you are in the middle of the desert and have to contend with...oh, I'll just get to the awful.

In the middle of the desert, you inhale a vast amount of sand even when you don't know you're doing it. So, about halfway through the first day you start coughing, and by the end of the third day, you have black lung.

Shade is hard to come by at Lollapalooza, but it's non-existent at Coachella. Irony of ironies: every Canadian in the place prayed for snow.

Probably the biggest problem at Coachella is that the stages are too close together, and you can hear sound from one when you're watching a band at another.

I once complained about the sound from Soundgarden spilling over Arcade Fire at Lollapalooza, but that was nothing compared to the sound spillage at Coachella. You can't escape it. I was frankly surprised that more artists didn't beef about it from the stage, so it was left to Bernard Sumner from New Order to carry the torch for pissed-off artists and fans everywhere.

Implying that the music coming from the other stage was 1. Too loud and 2. Bad, he and the band did their best to play through their set, but you could tell it was a struggle. At the end, Sumner said, "I hope Coachella will have us back" - so maybe that's the deal: don't complain, and we'll have you back.

The festival is on a massive site, so why the tents are so close together and artists like, say, Rodriguez, have to compete with 1,000 bpm coming from the dance tent, is beyond me.

If there's 100,000 people at Coachella, and New Order is a top-billed band playing at the end of the night, then why is it playing a tent that holds about 1,000 people? Recipe for disaster...

4. The pushing and shoving

Like Lollapalooza, no one plants themselves in front of a stage and waits to see their favorite band anymore. No, they wait till the last minute and shove their way to the front. The worst offenders: two girls who crawled their way to the front for Rodriguez, and the Patton Oswalt-looking dude who shoved and farted his way to the front of New Order, and then expected everyone around him to be happy to see him. Totally lame.

You try to stop someone from cutting in, and guess who gets called "arsehole?" Nice.

It's not as good as Lollapalooza (hint: Lolla is in Chicago). As well, you're in the middle of the desert, can't bring anything into the festival with you, and there's no nearby competition, which means it costs $30 for a milkshake (yeah, I'm exaggerating, but it's totally expensive).

So, the two festivals are similar for reasons good and bad. However, I did come face-to-face with Paris Hilton at Coachella, so I have to give it a slight edge over Lolla for that alone.

See you next year, Coachella. We'll always have Paris! 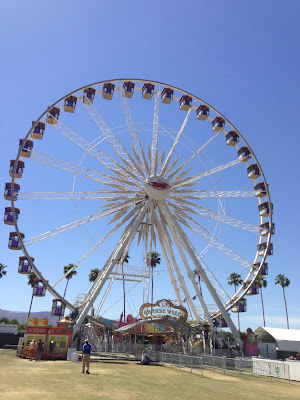