The hackiest ways to get laffs at a comedy club 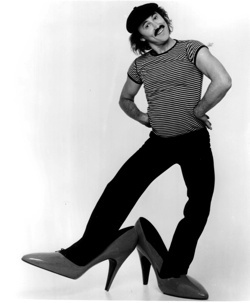 Nothing hacky here. Move along.

By now, everyone knows about my completely rational war on the word "unique" in ads.

It's not just that the word is lame, it's that it's "hack" - the word people "in the know" use to describe writing that's dull, unoriginal, done to death, or stupid.

Here, then, is a collection of the hackiest ways to make an audience laugh at a comedy club:

"California had more power blackouts yesterday. In other news, Roseanne microwaved some nachos."

Stand up isn't the fake news, and even if it was: this structure is hack hack hacky sack.

Said after you realize a joke bombed, it will take the awkward silence and magnify it a zillionfold. Or, the audience will laugh, at which point you'll realize the joke that originally didn't get a laugh actually might've been a keeper.

What better way to tell the crowd, "I have no more material" than by going to it for "found" material, which may remain missing in action. "You're from Saskatchewan? Watch out, folks, if the Coco Puffs turn brown, he'll burn you for witchcraft."

Here's another one I did myself, ad nauseam. Sorry. "I'm half (blank) and half (blank), which means (blank)."

You have no ending to your act, so you cry, "That's my time" and run off to a smattering of applause. Instead, try ending with a hilarious joke and run off to laughter.

6. The differences between men and women

"The toilet seat. Am I right, ladies?"

"I drive a (blank), which is (country of origin) for crap." e.g. Toyota, Japanese. Mix and match for best results.

"What are you guys from Transcona? That's six bus transfers!"

Reminds me of the time a young Russell Peters came to Rumors and did material about Etobicoke. Ahhh...those were the days!

Positioning yourself as a professional comedian and creative genius to the unwashed masses in the audience means you're neither.

And any of the million stock lines designed to deal with drunk folk.

Because it's great to tell your audience that it must be deaf and/or stupid to not love your comedy.

Put in the punchline of any medical joke, "jaws of life" shows the crowd that you're not just a great comedian, but that you also might know a thing or two about medicine.

Encouraging the audience to applaud at the end of your set because a) you have or have had an illness b) you have a relative with an illness c) we're all stuck on this crazy rock together, and it's good we can get together to have a laugh d) at your last show, the crowd gave you a standing ovation.

"Thank you. That was Sean Connery, everyone."

It's not sharing, it's copyright infringement and plagiarism. Oh, sorry: that's my time!
Posted by Kenton Larsen at 11:49 AM