Mad Men vs. The Newsroom: 'tis truer to advertise than journalize 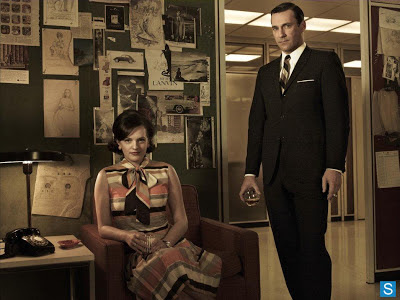 Are you there, Peggy? It's me, Don. From Spoilertv.com.


WARNING: This article contains spoilers from the sixth season of Mad Men.


I'd rather hang with Don Draper than Will McAvoy. Does that make me a bad person?

It's a question I've asked before and I'm considering again as we find ourselves in the one-week no man's land between the end of another awesome season of Mad Men and the beginning of what will probably be another shitty season of The Newsroom.

In theory, journalism is all about exposing the truth and advertising is all about hiding it - just ask any new TV reporter! - so we should probably identify more with a journalist doing God's work than an advertiser doing clients' work, right?

In practice, though, Mad Men's conflicted and imperfect Don Draper is so much more interesting and authentic than The Newsroom's self-righteous and -important windbag Will McAvoy, whose job is ostensibly to uncover the truth.

At its heart, the problem with The Newsroom is that it believes its own "self-righteous myth-making" (thank you Conrad Black). Like its characters, the show has its head so far up its own arse, it has no idea how dumb it actually is.

The series kicks off with anchorman McAvoy making a public declaration that America is not the greatest country on Earth (gasp!). After a three-week "vacation," he goes back to work and is shocked to discover that his new boss is his ex-girlfriend. Boing.

If it's lame that our hero's big moment of truth is just a setup for an equally big TV cliche, the series also asks us to believe that, among other things, a tell-it-like-it-is anchorman is OK dismissing seeing his girlfriend as a hallucination, a hardened war reporter doesn't know how email works, and young journalists not only read The Rock's tweets out loud to each other at parties, but the tweets actually foreshadow the news.

The Newsroom also isn't above chiding tabloid and online journalists at the same time it treats us to an episode about the Gabrielle Giffords shooting that actually ends with a Coldplay "Fix You" montage, as though the shocking news needs a big, fat cliche in order to make it more authentic.

What makes McAvoy (and the show) so unappealing is that he's the anchor dedicated to "the truth" while he believes his own lies; he not only fails to see that empty PR cliches wouldn't work if he didn't report them, but even embraces them himself. He's a quick-thinking, tough-talking smart guy who's dumb enough to get burned by a tabloid journalist. 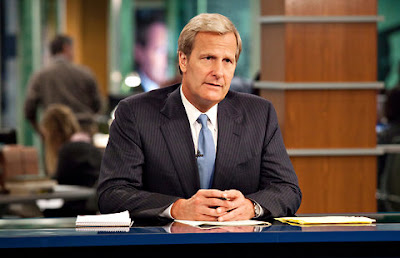 Will: he ever learn?

Don Draper is the advertiser who proves my favorite line: "advertisers are more honest about their dishonesty." Mad Men season six was all about Draper losing his stomach for the lies he sells to others and himself in order to create the illusion of happiness.

Mad Men season six ends where The Newsroom season one begins: with our main character finally telling the truth. It's no accident that Draper spills his guts in a boardroom pitch with Hershey's: an iconic American product (or is it a religion?) coming face to face with the awful reality of day-to-day American life.

The truth doesn't set Draper free: America prefers the seeming authenticity he creates in boardrooms to the actual reality of his life. To his colleagues, Draper's "shit the bed" and they force him to take an undefined leave of absence that puts his career and marriage in question.

On The Newsroom, the truth is as manufactured as a Hershey's Bar. On Mad Men, the truth has consequences. You want the truth, Will McAvoy? You can't handle the truth.
Posted by Kenton Larsen at 8:48 PM