"What's wrong with the newspaper?" 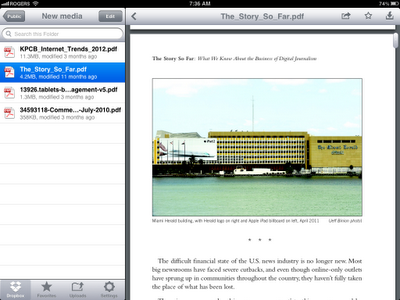 For the past couple of years, I've kicked off my ad and PR classes by showing the above photo, from The Story So Far: What We Know About the Business of Digital Journalism, a report by Columbia Journalism School (click here for the full PDF).

The photo features the Miami Herald building with a giant iPad ad on the side.

"Why is this photo ironic?" I ask.

Student: "The newspaper business is advertising the thing that helped destroy it."

Perhaps it's even more ironic that I'm showing it to them on an iPad plugged into a digital projector in a program that teaches journalism.

The report rubs salt in the wound:


"At the end of March 2001, the stock market valued the Herald's parent company, Knight-Ridder, at almost the same amount as Apple: $3.8 billion. Ten years later, Apple's valuation is more than $300 billion. And Knight-Ridder no longer exists as an independent company."

It's an old discussion, but it's a subject worth considering for students who want to work in journalism, many of whom are too young to know what "traditional media" means.

Among the layoffs were some grads from the program in which I teach. One of them was among the first students I ever saw in a classroom. She was and is "an awesome kid," and was doing awesome things for her newspaper. That they got rid of her was an enormous surprise. That they laid people off was not.

The Winnipeg Free Press then ran an opinion piece by one of my current students called, "What's wrong with the newspaper?"

I have no idea if the headline writer meant, "The writer is going to tell you what's wrong with the newspaper," "What's so bad about a newspaper?," or both. I asked my student how she perceives it, and she doesn't know either. Whatever the case, she's a convenient bogeyman for the newspaper industry to parade before its imagined audience of octogenarians: "Nooooo - not the young people on the Twitter!!"

The writing on the wall has been there for some time, so I was surprised when folks blamed "the kids," Twitter, and those greedy readers who refuse to pay for content. More irony: the debate was happening online.

(Read Free Press reporter Dan Lett's column: What did you think was going to happen).

The Elvis genie has left the barn

I hate to break it to ya, folks, but the horse has left the barn, the genie has left the bottle, and Elvis has left the building: we live in a digital world, and the old, traditional media model doesn't cut it anymore. You don't have to like it, but it's a fact: we're going digital and we're going there yesterday.

Like the Titanic slowly approaching the iceberg, we've seen no shortage of evidence that this is where our local newspapers are going (and other traditional-media journalism and media is right there with them).

There's also Newspaper Death Watch, which exists to mark the death of print and "the rebirth of journalism," and Wikipedia's "Future of Newspapers" entry. Adbusters wrote a story in 2007 with the optimistic headline, "The Death of Canadian Journalism."

I recall pulling out the latter article out on the first day of school in 2007 and joking, "You enroll in a course to be a journalist, and the entire profession dies - ain't life grand?" (It was, of course, only a joke).

I also wrote a blog post in 2009 in which I expressed frustration with the Free Press for choosing a Sunday tabloid format (On7!) over digital. I ended up getting an email from a Free Press reporter who was upset at my lack of belief in newspapers, but ultimately ended up agreeing with me that On7 was off in terms of the demographic it was trying to reach.

When the Free Press finally launched it's iPad app, it was also a dud. I wrote about it two years ago.

What's up? Here's how the Columbia Journalism School report calls it in its conclusion: "Journalists just don't understand their business," says Randall Rothenberg, then-journalist and now-president of the Interactive Advertising Bureau.

The foot is on the other shoe

I do understand the frustration of the remaining staff at the Free Press. No one who has power and then loses it likes it. Just ask Saddam Hussein. Oh, yeah...

Rupert Murdoch weighs in on the issue in Mike Walsh's excellent book, Futuretainment:


"Power is moving away from the old elite in our industry - the editors, the chief executives, and let's face it, the proprietors. A generation of media consumers has arisen, demanding content delivered when they want it, how they want it, and very much as they want it."

For the longest time, the gatekeeper-controlled media had it good. They controlled the info, and we paid for it, because we had no other choice. It could put out anything and do reasonably well. Traditional media gave us Knight Rider, and we had no choice but to watch it. Years later, traditional media tried to give us Knight Rider again and we refused to watch it, because we had some choices.

For traditional media, it's been a struggle to find a profit model. You can't charge as much for ads online. Some newspapers have put up a paywall only to realize that "popularity" is as much a currency these days as currency. You want your audience to link to your content, rate it, debate it, embed it, pass it along, mash it up, and talk about it. A paywall stops this from happening.

The proletariat has seized the means of production (just as Karl Marx once predicted in the Facebook Manifesto!). The former gatekeeper is now dependent on a loud audience network. Futuretainment: "Your only hope of ensuring distribution is ensuring that consumers are motivated enough to do it for you."

I've offered my own starting point to a solution, which no journalist likes to hear: Journalism could use a little PR right about now. Hint: if you blame your readers for embracing online media, we might as well shut down the paper now.

The report I link to, above, does as nice a job as any at chronicling what's up and what's to be done about it. Spoiler: the jury is out. However, as a famous former CreComm instructor once told me (1,000 times in a row): "The Chinese symbol for crisis is opportunity." At press time, China has not returned this reporter's calls.

Regardless of where you stand on the issue, we can agree: the journalist of the future won't be a gatekeeper, but an inventor. The revolution starts now.
Posted by Kenton Larsen at 11:33 AM

Email ThisBlogThis!Share to TwitterShare to FacebookShare to Pinterest
Labels: newspapers