Is Lore the Facebook for education we've been waiting for? 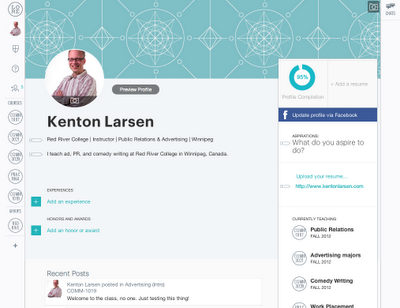 Last year, I tried to use Edmodo, but after a grand total of two students took me up on my offer to join, I mostly used it to meet other teachers and crowdsource assignments.

Lore could be different: it looks pretty sweet, like Facebook meets Google+, and it promises a world in which it's easy for students to send messages, have conversations, submit assignments, and get back marks. Even better: it's free.

I've monkeyed around with it a bit today, and it seems to work quite well. The only issue is that it appears to take a very long time to upload an assignment or outline. The status bar keeps chugging away, and you never get a message that says, "It's uploaded."

That complaint aside, it would also be great if there was a mobile app to go with the website, but I assume it's on its way.

I'm going to give it a trial run this semester for students who are interested. So far, I've just got the course outlines up, but if enough people use this, we might be able to use it over the longer term. I'll give out "the codes" to join in class, and we'll take it from there.

And while you're at it, have a gander at Learnist, which could very well be the Pinterest of learning (and there's an app too).

The Big Question: where's the Twitter for learning? Oh, yeah, that would just be Twitter.
Posted by Kenton Larsen at 1:41 PM