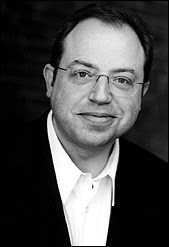 Before I left Saskatchewan yesterday, I had lunch at the lovely and historic Hotel Saskatchewan, where Regina's most famous celebrities hang out, like...um...er...Ralph Goodale.

True: the last time I was there, I ran into the finance minister himself, who worked the room like (insert the inappropriate John Edwards metaphor of your choice here). Honestly, though, Ralph sang happy birthday to people, he served them brunch, he wrote them cheques - the guy is a PR machine. Yay, Ralph.

Fast forward one year later: yesterday, back at the Hotel Saskatchewan, I run into Brent Butt, star of CTV's Corner Gas. By coincidence, the day before, I sent him an e-mail inviting him to talk to the Cre-Comm students on his last promotional tour for the show.

Once the laughter subsided (wah, wah, wah), I knew I had him, so I invited him to come speak to the Cre-Comm students on his promotional tour (the last) for Corner Gas. I realized that he hadn't swallowed his salad yet, so I said, "Goodbye" and he said, "See you around."

Now, if it turns out that this somehow actually works, and he comes to talk to the students, then the moral of the story is: Brent Butt rules, especially in light of the rude interruption of his lunch.

If he doesn't come out, then the moral of the story is: there's always Ralph Goodale.
Posted by Kenton Larsen at 12:24 PM