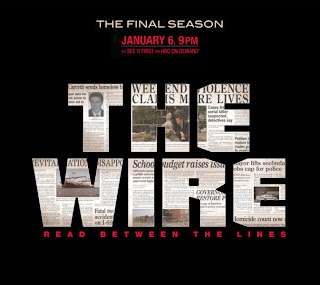 I recently finished watching the last season of the Wire, the ridiculously great show that no one ever watched and, incredibly, did not get nominated for a single Emmy this year.

Its final and maybe best season is all about our hero, Jimmy McNulty, getting so fed up with things at the Baltimore Police Department that he "invents" a serial killer to get a cop car that works, a wiretap, and overtime hours. I won't get into how he gets the bodies or links the crimes, suffice to say: he does. Great premise.

The even-better thing about the season is that we get to see the inner workings of the Baltimore Sun. The morally bankrupt cop has nothing on the fledgling journalist who, realizing that reporting takes work and sources, "sweetens" his stories with phony quotes and people who may or may not exist. Of course, the management at the Sun doesn't care if some of his facts are questionable, because "if it bleeds, it leads."

The definitive season highlight is McNulty calling the journalist and pretending to be "the serial killer," knowing full well that the journalist is making up the facts as he goes along. Funny and thrilling in a "don't get caught, Vic Mackey!" kind of way.

That's all I'll say, other than that this should be required viewing for everyone as a primer on cops, politics, PR, education, and journalism. If you've never seen an episode, I envy you: order the five seasons on DVD and watch them in a row. If you don't think that it's the best TV you've ever watched, then - like Leone Baxter once said - you like corn more than caviar.