Junk you hate yourself for loving 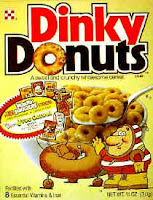 I’m cuckoo for Coco Puffs, always after those Lucky Charms, and I agree with the silly rabbit: Trix most definitely aren’t for kids.

Is it wrong to love something so shamelessly targeted at kids, so sugarcoated and unhealthy, so downright evil? Like Mikey, the Life cereal kid, when it comes to cereal, I’ll eat damn well anything. Or did Mikey hate cereal? Whatever – he died mixing Pop Rocks with Coke.

My passion for cereal began long before Seinfeld and his cereal-filled infomercial, er, sitcom. One of my earliest memories is of sitting in my family’s kitchen and sharing a bowl of Dinky Donuts with my imaginary manservant, Peter. Oh, how we used to laugh at each other’s jokes, Peter and I!

In case you weren't around for the big cereal revolution of the mid-1980s, the disturbingly named Dinky Donuts were discovered by scientists searching for a substance tougher and more durable than concrete. They had a lucky accident when a government “volunteer” said the substance, though it busted all of his teeth, tasted kind of “donutty.”

That may be the reason the cereal was eventually discontinued; it couldn’t have been for “misleading advertising:” the official spokesman for Dinky Donuts was “Dinky” the middle-aged, overweight astronaut who searched the galaxy for donuts in a donut-shaped spaceship. “Hey kids. Eat this cereal and one day you could be just like this guy!”

Now that I’m older and more concerned about nutrition, I’ve moved on to Cookie Crisp, which is a more evil junk cereal than most, given that I have to travel into George W. Bush’s America to buy it. Hey, George, don’t take my Cookie Crisp purchase as a sign that I support your foreign policy, OK? OK!

Still, it almost seemed worth it when my 16-year-old nieces from Saskatchewan recently visited. I should point out that a relative in Saskatchewan once told me that you can’t eat Coco Puffs in Regina, because if the milk turns brown, they’ll burn you for witchcraft.

I don’t know if that’s true, but so delighted were my nieces at the very possibility of filling a bowl with chocolate-chip cookies, pouring milk on them, and calling it “cereal,” two days later my secret Cookie Crisp stash was no more.

In the great Frontline documentary, The Persuaders, Kevin Roberts says that creating loyalty beyond reason should be the goal of any marketing manager, because that means you can appeal to your heavy-product users forever. Or is that "heavy product-users?"

Important to this pursuit, he says, is maintaining a veneer of “mystery” in the product. Just like your girlfriend dumps you once she knows everything about you, a product must strive to be constantly innovative, entertaining, and stimulating, or suffer the same fate.

As an example of a product full of mystery, Roberts cites (surprise) Cheerios:

“Cheerios is full of mystery. You don’t think that people just eat them in a bowl, do you? Most kids play with them, make up stories about them, and imagine them.”

This explains why a household of four has seven iPods, why people travel 500 miles to shop at an Ikea, and why at age 40 I’m still eating junk food for breakfast. It’s the mystery, stupid.

Something tells me that the CSI guys wouldn’t be too interested in solving the Dinky Donuts mystery, though they’d be well advised to get to the bottom of whether Frankenberries are supposed to make your urine turn red.

My relationship with junk cereal reminds me a lot of what my father once said about Wal-Mart: “I hate Wal-Mart for putting local merchants out of business, but I love their low prices.” I hate junk cereal because, well, it’s junk, yet I love its tasty donutty goodness, incisors be damned.

Still, I have a dream that one day I’ll break the addiction and move on to something less evil, like…um…Pop Tarts? Until that day, I’ll take comfort in the words of John “Sitting on a Corn Flake” Lennon: “You may say I’m a dreamer, but I’m not the only one; I hope someday you’ll join me, and…CRUNCH, CRUNCH, CRUNCH, CRUNCH, CRUNCH.
Posted by Kenton Larsen at 9:22 PM